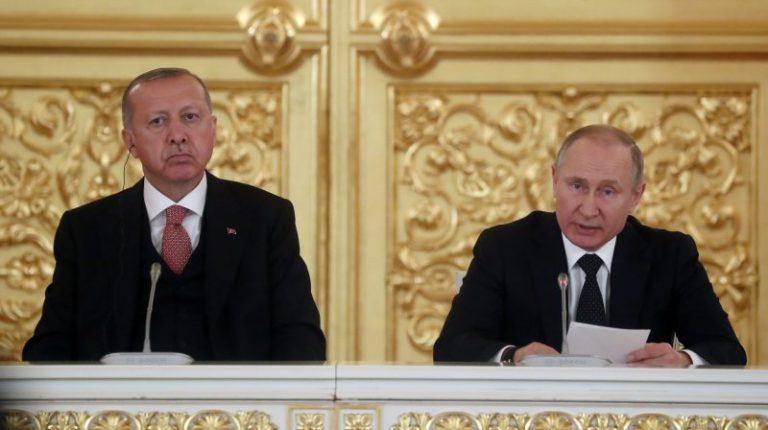 Russian President Vladimir Putin discussed the Turkish offensive in Syria during a phone call with the Turkish president Recep Tayyip Erdogan on Saturday, according to Reuters.

In a statement, the Turkish presidency said that both presidents had confirmed their commitment to the agreement struck in Sochi, which includes joint Turkish-Russian patrols in north eastern Syria.

During the call, they also discussed bilateral trade, the Turkish presidency added without delving into any further details.

Moreover, the Turkish president is to hold talks with US President Donald Trump in Washington on Wednesday. The visit has raised concerns about potential clashes in the US, especially after what happened in 2017 during Erdogan’s visit to Washington, when his security guards were involved in violent clashes with protestors.

Meanwhile the Syrian president Bashar Al-Assad said that the European Union (EU) adopts a double-standard approach when dealing with Erdogan.

In an interview with Russia Today (RT) news outlet, Assad said, “The relationship between Europe and Turkey is love-hate”, explaining that the EU “hates” him. However, European nations cannot but listen to what he has to say.

The EU is well aware that Erdogan would send extremists and terrorists to Europe, he added.

At least four Syrian soldiers were killed, and several others were wounded in a heavy machine gun fire in the village of Um Shaifa near the town of Ras Al-Ayn, which was captured by Turkish-led forces last month, Syrian local media reported.