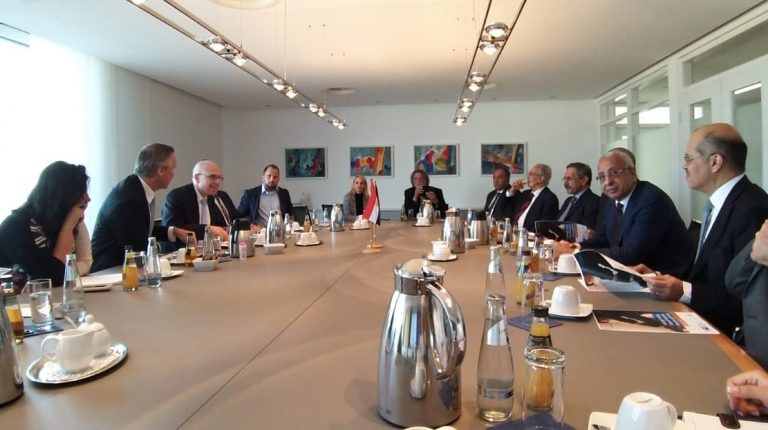 Berlin –The Federation of Egyptian Industries (FEI) concluded its meetings on Wednesday, as part of a work visit that began on Monday to the German capital Berlin. The delegation met with representatives of the German Electrical and Electronic Manufacturers’ Association (ZVEI) and the software and digital transformation company SAP.

Minister Plenipotentiary and head of the Egyptian commercial office in Berlin Maher El-Sherif, suggested to the ZVEI to organise a visit to Egypt, which includes a number of member companies to identify industrial investment opportunities, and to discuss signing partnerships with local Egyptian companies.

Managing director of the association, Patricia Solaro, said that Egyptian companies should benefit from the ongoing trade war between the United States and China, as German and European companies in general are looking for a way away from that war, which means a possibility to use Egypt’s position to become a base for German companies in the direction of African and Arab markets.

She added, “Under the trade war, global competition has become fierce and therefore companies need to develop their potential in order to strengthen competition since this creates a wide scope for cooperation between German and Egyptian companies in the field of digital development.”

The ZVEI has around 1,600 member companies and is active in five areas: industry, energy, health, and real estate.

On the side lines of the second meeting held with officials of SAP, which is one of the global public companies in the field of programming and technology, Tarek Tawfik, Vice-Chairperson of the FEI, said that Egyptian industry needs to catch up with the train of technological development, as the world is witnessing a rapid development in the field of adopting artificial intelligence. He pointed out that the meetings held by the FEI delegation were aimed at identifying the latest technologies used in the industry and the possibility of transferring them to Egypt.

Caroline King, senior director of the digital transformation unit at SAP said that her company, which has an office in Egypt since 2007, supports Egypt’s Vision 2030, which includes the axis of the digital transformation plan and the government’s orientation towards relying on technology in its dealings. She noted that the company works with the public and private sectors in Egypt to promote the use of technology in projects.

The company is currently dealing with seven major Egyptian companies, including Egypt Post, Elaraby Group, Swvl, Edita, and TAQA with plans to work with more companies in the near future.

The IPO of ALCN postponed to 2020 because of weak liquidity