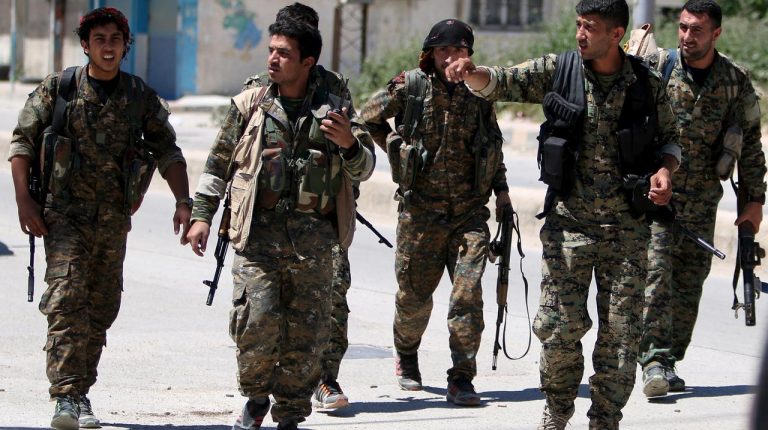 Troops from Turkey and the United States conducted on Sunday the first joint ground patrol, to establish a “safe zone” in northern Syria along the Syrian-Turkish border which is mainly controlled by the Kurdish People’s Protection unit (YPG) forces.

The American spokesperson for the coalition Colonel Myles Caggins, said that “today’s patrol maintained security within the area and demonstrates our continued commitment to address Turkey’s legitimate security concerns,” adding, “The operation aimed to keep the Syrian-Kurdish militia YPG away from Turkey’s border.”

Moreover, the Syrian Foreign Ministry condemned in a statement the US-Turkish joint patrols, saying they were a “flagrant violation” of the Syrian sovereignty. It also described that manoeuvre as a violation of the “territorial integrity” of Syria.

Turkey has planned to establish the “safe zone,” since 2017, which it says should be at least 30 km deep in Syria, to push back the Syrian-Kurdish fighters away from its border, as the country considers the YPG as a threat. However,  US-backed Turkish troops over the last four years have taken control of much of north-eastern Syria from Islamic State (IS) militants.

The patrol was headed to a Kurdish-controlled base apparently to ensure that trenches and sand berms had been removed, AP added.

The Turkish Defence Ministry confirmed the start of the joint patrols, saying that the joint land and air patrols would continue over the next few days.

Refugee crisis grows in Greece as EU looks on