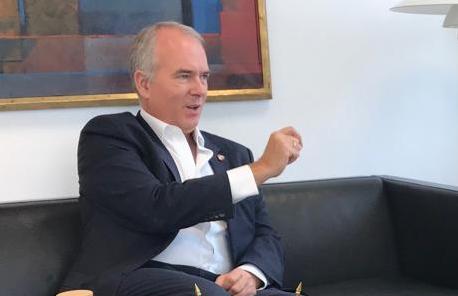 The numbers of Danish tourists visiting Egypt are expected to continue increasing by end of 2019, to more than 60,000 tourists which was achieved last year, Denmark’s ambassador to Egypt, Tomas Anker, said.

Danish tourists’ arrivals to Egypt in 2018 were roughly the same average of the numbers before the 2011 Revolution, the ambassador told Daily News Egypt, adding, “tour operators are opening additional trips in Egypt, the books are full, and I think that Egypt is a very popular country for people to visit.”

The Danish ambassador also highlighted other key areas of the joint relations with Egypt that will be thriving this year which are the health care and food cooperation.

“Later this year, we will bring a delegation of Egyptian doctors to Denmark. This delegation will be a blend of private sector and government participants,” the ambassador mentioned, expecting a Danish health care delegation to visit Egypt in the fall.

Denmark has a very large food business sector, said the ambassador, noting, “we are only six million people, yet, we produce food to feed about five folds the Danish population.”

The embassy is preparing a visit for a food industry delegation from Denmark to Egypt, the ambassador emphasised, noting that Egypt is a big market enjoying more than 100 million consumers with a growing retail industry.

“For the official visits from Denmark to Egypt, we have a new government and hopefully we can arrange a visit for the Minister of Climate, Energy and Utilities, Dan Jørgensen to come to Egypt. We also hope that the Danish Minister of Foreign Affairs, Jeppe Kofod will visit Egypt,” the ambassador shared.

Earlier this week, the ambassador mentioned to DNE that the Danish businesspersons’ reactions toward Egypt’s business climate improvement, is very positive.

The number of Danish investment funds are actively eyeing new investment opportunities in the Egyptian market, especially in the energy, infrastructure, transport, and food sectors, he added.

Calls for dismissing Health Minister over remarks against pharmacists, nurses