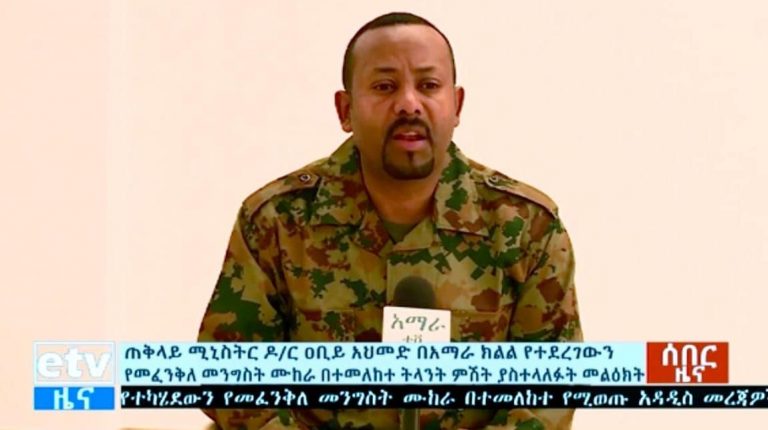 Ethiopian Army Chief-of-Staff General Seare Mekonnen was killed by his own bodyguard in the capital, Addis Ababa, during a coup attempt on the Amhara provincial government on Saturday.

Moreover, on Saturday, the head of Amhara state Ambachew Mekonnen and his advisor were attacked and killed in their offices, state media reported.

In a televised speech delivered after Saturday midnight, the Ethiopian Prime Minister Abiy Ahmed, dressed in a military uniform, said that the attack on Mekonnen was connected to the coup attempt in Bahir Dar, Amhara.

A “killing squad” led by the security chief of Amhara stormed a government meeting on Saturday afternoon, killing the provincial governor Ambachew Mekonnen, a spokesperson for the prime minister told reporters on Sunday.

“Shortly after, the chief-of-staff, General Seare Mekonnen, was killed by his bodyguard,” the spokesperson said, describing the attack as an “organised attack.”

Ahmed was quoted as saying that Mekonnen was injured while “coordinating and leading the response to the coup attempt with a high sense of responsibility.”

He added that Mekonnen was attacked by “members of his nearby entourage” and that the authorities arrested the attackers.

“While he was coordinating and leading the response to the coup with a strong sense of mission, people in his close entourage, and bought by hired elements, attacked the beloved and respected chief of general staff,” Ahmed said.

Amhara is north of Addis Ababa, one of nine provinces in Ethiopia and the second largest in the country.

The federal government announced on Saturday that an armed group carried out at a coup against the Amhara government at 7 pm local time, saying the attempt had been thwarted.

“The attempted coup d’état in Amhara is unconstitutional and aims to thwart the hard-won peace in the region,” the prime minister’s office said in a statement.

“This illegal attempt must be condemned by all Ethiopians. The federal government has the ability to defeat this armed group,” he added.

In a statement following the Saturday incidents, the Amhara Democratic Party (ADP) issued a statement accusing Asaminew Tsige, the former military general and Amhara’s security head, of being behind the attempted coup.

Following the murder of Ethiopia’s army leader, the United States embassy in Addis Ababa issued a series of warnings to US citizens living in Ethiopia.

Since Abiy Ahmed’s rise to power in Ethiopia in April 2018, he has released political prisoners, lifted the ban on political parties, and prosecuted officials accused of gross human rights violations, but ethnic violence has erupted in many areas, including Amhara.

It is an honour for any political party to back the state: Nation’s Future head