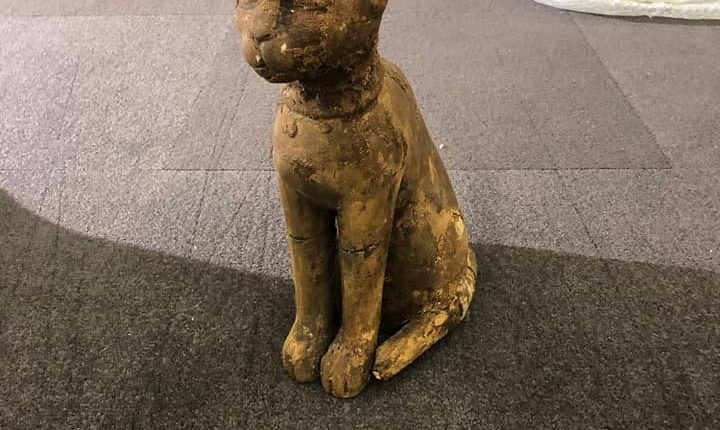 After a year of continuous efforts to preserve the Egyptian civilisation’s legacy, the Egyptian embassy in Bern, Switzerland, received on Saturday two antiquities that were seized by Swiss authorities in a smuggling attempt last year.

The ministry announced on Sunday that the Egyptian authorities received two statues, one depicting a god, and the other a goddess from different periods.

The first received relic showcases goddess Tadibast III dating back to the Third Intermediate Period. The wooden statue features the Egyptian queen as a cat. Meanwhile, the other statue depicts Horus, Egypt’s God of sun. The pink granite statue showcases the god as a falcon, the same way he has been known over the years.

Shaaban Abdel–Gawad, the director general of the Department of Recovered Antiquities, stated in a press release that retrieving these antiquities comes after a year of non-stop efforts from the Egyptian side.

For his side, Egypt’s ambassador to Switzerland, Hisham Seif El-Din, added that Egypt appreciates the efforts provided by the Swiss authorities “which effectively led into retrieving the relics.”

He added that Egypt’s continuous efforts extend into bringing some antiquities from the concerned authorities in Switzerland.

This comes a month after Egypt retrieved a gilded coffin that was smuggled from Egypt in 2011 to the Metropolitan Museum of Art of New York. The coffin belongs to Nedjemankh, who was the priest of the ram-god Heryshef, called the ruler of the riverbank.

The museum bought the coffin from someone who showed them an antiquities trading licence in 1971, when relics’ trade was authorised. However, it discovered that his license was proven to be fake.

Abdel Gawad previously stated that in the last two years, Egypt has retrieved over 1,000 smuggled artefacts, from several countries in the past, including 586 items that were returned in 2017.

The last call to save one of Egypt’s statues

Egypt receives over 374 illegal contraband antiques from France, US