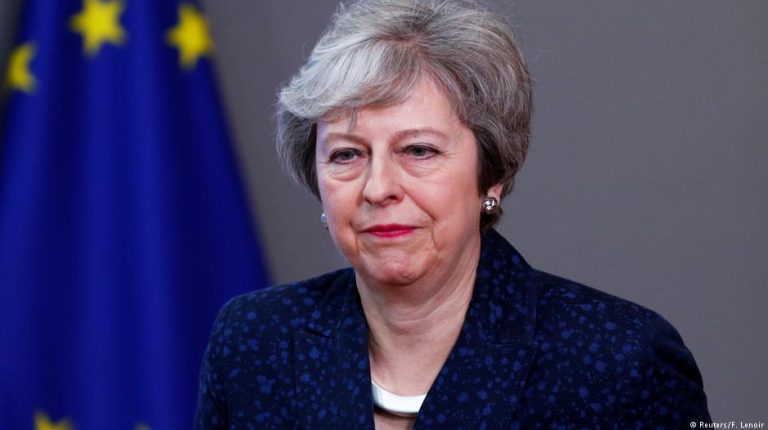 Prime Minister Theresa May has delayed a lawmakers’ vote on Brexit to just over two weeks before Britain’s planned EU exit. The opposition Labour Party has hinted it is moving in the “direction” of a new referendum.British Prime Minister Theresa May told the British media on Sunday that a vote on her Brexit deal would be delayed until the 12th of March — only 17 days before the Brexit deadline.

May, on her way to an EU-Arab League summit in Egypt, said her negotiating team still had issues to thrash out with their opposite numbers in Brussels.

"As a result of that we won't bring a meaningful vote to parliament this week. But we will ensure that that happens by March 12," she was quoted as saying.

May said she still planned for the country to leave the EU at the end of March.

"It is still within our grasp to leave the European Union with a deal on the 29th of March and that is what we are working to do," May told reporters aboard her plane, as she traveled to a summit of EU and Arab leaders in Egypt.

Delaying the Brexit deadline "doesn't solve the problem," May added.

"There will always come a point where we have to decide whether we accept the deal that's been negotiated or not."

May had been due to go before British lawmakers on Tuesday to offer them an update on the talks with EU leaders. The prime minister had promised either a new vote on the deal or to allow MPs on Wednesday to debate their own ideas for the way forward.

The prime minister has so farfailed to get her proposal of a Brexit deal through the British parliament, and many politicians accuse her of trying to "run down the clock" using the fear of Britain crashing out of the EU as leverage for her opponents both in London and Brussels.

May is expected to use the Egypt summit to try to get concessions from EU representatives before facing parliament.

Meanwhile, the nation's biggest opposition party signaled it might call for a new referendum which could, depending on the outcome, keep the UK in the bloc.

When asked if Labour wanted a new vote, the party's deputy leader Tom Watson told the BBC that they were "moving in that direction."

Read more: What you need to know about Brexit endgame

Watson said his party would prefer for Prime Minister Theresa May to deliver a deal that would keep the UK's economy close to the EU.

No May deal on new ballot

Labour leader Jeremy Corbyn perfunctorily campaigned in favor of staying in the EU ahead of the 2016 Brexit vote, facing criticism from the Remain camp for his lukewarm opposition to Brexit. Currently, the Labour position on Brexit is that the party "respects the result of the referendum, and Britain is leaving the EU."

On their website, however, the party says it would "not support any Tory deal that would do lasting damage to jobs, rights and living standards."

On Sunday, Labour's trade spokesman Barry Gardiner said that a second referendum should serve as a "safety net."

"We cannot risk no deal," Gardiner told Sky News television, adding that a movement towards a second vote was growing more visible. The Labour politician also said that any new vote would not include Theresa May's deal as it was "not credible."

Every evening at 1830 UTC, DW's editors send out a selection of the day's hard news and quality feature journalism. You can sign up to receive it directly here.

May discusses Brexit with European leaders in Sharm El-Sheikh