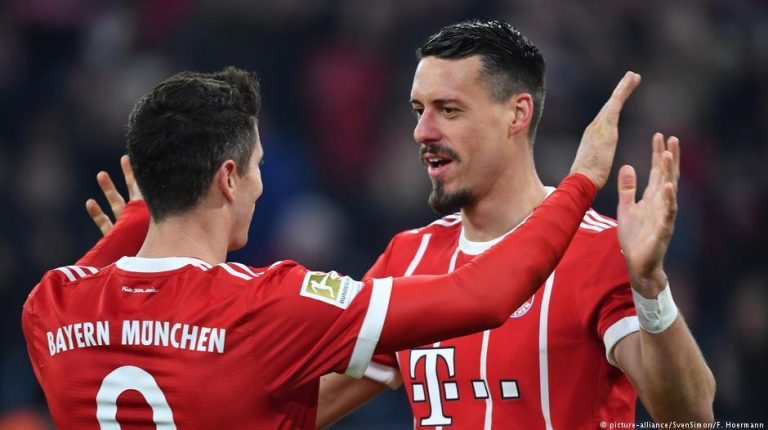 A year after he signed to solve Bayern Munich’s long-standing backup striker issues, Sandro Wagner has departed. While Robert Lewandowski is difficult to replace, have Bayern left themselves short up front once more?Being the understudy to a great is a tough gig, but it does have its perks. After a year spent largely sitting on the bench, Sandro Wagner leaves his boyhood club with a Bundesliga winner's medal and a new lucrative life in China awaiting.

When Wagner rejoined Bayern last January after a productive spell at Hoffenheim, he knew exactly what he was signing up for; to step in when Robert Lewandowski required a break or was unavailable. The target man fulfilled his brief last season, notching eight league goals at a rate of about one every 90 minutes while, critically, seeming content to play second fiddle.

Bayern looked to have adequately solved an issue that's been present at least since Lewandowski arrived from Borussia Dortmund at the start of the 2014-15 campaign. Though there are those that point to a propensity to miss chances in big games, there's no question Lewandowski, 30, is Bayern's best and most reliable finisher and they miss him when he's out. With ground to make up in the Bundesliga and a daunting Champions League task against Premier League leaders Liverpool to come, what are Bayern's options if they Lewandowski goes down with an injury?

Thomas Müller has often been the man tasked with filling the Pole's scoring boots, with mixed results. Playing as a lone striker has never been his strength, with his movement more suited to finding spaces between the lines and his physical attributes making it difficult to play with his back to goal. But for many years, Müller did at least have the goal scorer's instinct.

But even that seems to have deserted him in recent times. This season, the Bayern youth product has scored just five times in all competitions, a goal every 399 minutes. Müller hasn't scored at all in his six Champions League appearances and has hit the net in just one Bundesliga match since September 1. That followed 13 goals in 58 league appearances over 2016-17 and 2017-18 after 33 in 63 the two seasons before that. While he has the pedigree, Müller certainly doesn't have the form. He'd be more of a gamble now than ever before.

In line with their tradition of snapping up the best talent from elsewhere in the Bundesliga, the German champions are reportedly keen on signing RB Leipzig and Germany forward Timo Werner. But with the Red Bull-backed club not short of cash, it seems highly unlikely that they could be tempted to part with their star man this January.

With Werner's contract due to expire in 2020 and no sign that the 22-year-old will commit to a new deal, Bayern will be confident that they can persuade the pacy forward to either agree to join at a reduced fee at the end of this season, or sign a pre-contract agreement – much as Lewandowski did – next January. The question is whether they can afford to wait that long.

Along with Müller, Serge Gnabry is another potential internal, though out-of-position, replacement should the worst happen. The former Arsenal man stepped in at the sharp end on a few occasions for Hoffenheim while on loan last season and impressed as he scored seven in his last eight games for the club.

Though he has the speed to stretch defenses and more strength than you may imagine for someone of his stature, Gnabry's dribbling is often better utilized when he has space to run into. Playing the 23-year-old as the focal point would necessitate a change of style for Bayern, who would perhaps then be much more suited to counterattacking football – not an obvious solution when most of the league is content to sit back against the Bavarians.

Though often happy to tie up future deals, like those for Leon Goretzka, Niklas Süle and Sebastian Rudy, in the winter, Bayern have rarely moved to strengthen their first team in the January transfer window.

Wagner himself was an exception but with the likes of Sebastian Haller, Luka Jovic (both Eintracht Frankfurt) and Werner seemingly out of reach for now, their options for a high-class replacement from the Bundesliga seem limited.

With Gonzalo Higuain and Alvaro Morata having already made loan moves this month, Bayern may also have left it too late to secure a backup with top-level experience, though both are gambles with loan fees and recent form. Regardless, Bayern sporting director Hasan Salihamidzic and his team will surely be scouring the market for anyone of the required caliber. With Bayern still harboring hopes in three competitions, a lack of cover could prove fatal.

Winter transfer window: some patch up their squads, others add depth