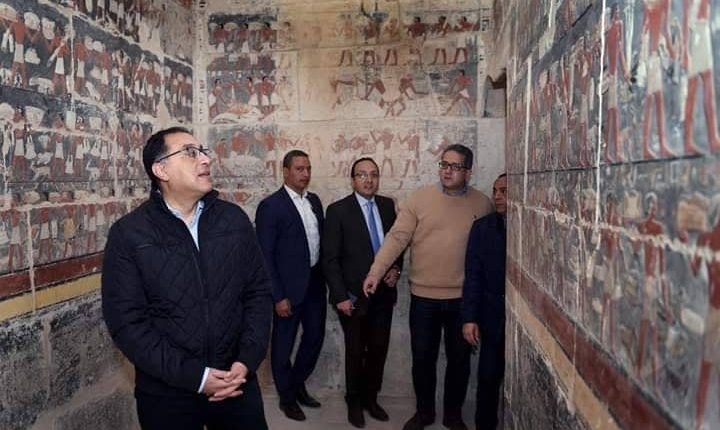 Egypt’s Prime Minister Moustafa Madbouly welcomed the New Year by visiting one of the country’s most famous touristic areas, Saqqara, to follow-up on the renovation projects taking place, and the archaeological missions’ development in their works.

The area is considered one of the places which witnessed the highest number of renovations and discoveries in 2018 as two main tombs were unearthed, with one of them possibly revealing the secrets of the ancient Egyptians’ mummification process.

The Minister of Antiquities, Khaled El-Anany, accompanied Madbouly in his visit, along with Ahmed Rashed, Giza’s governor, and Moustafa Waziri, the secretary general of Egypt’s Supreme Council of Antiquities.

The visit started with the Pyramid of Djoser and the south cemetery, which are both planned to be opened for tourists this year. The Pyramid of Djoser is the oldest pyramid built in the area and it contains the remains of the Third Dynasty pharaoh who is the son of King Khasekhemwy and Queen Nimaathap.

Moreover, the tour also included visiting one of the most renowned tombs discovered this year, belonging to a Fifth Dynasty royal priest at Saqqara called ‘Wahtye’, with its discovery announced in mid-December.

Furthermore, Madbouly also said that he will soon discuss ways to develop Al-Mariouteya road, in order to facilitate this area’s commute for tourists.