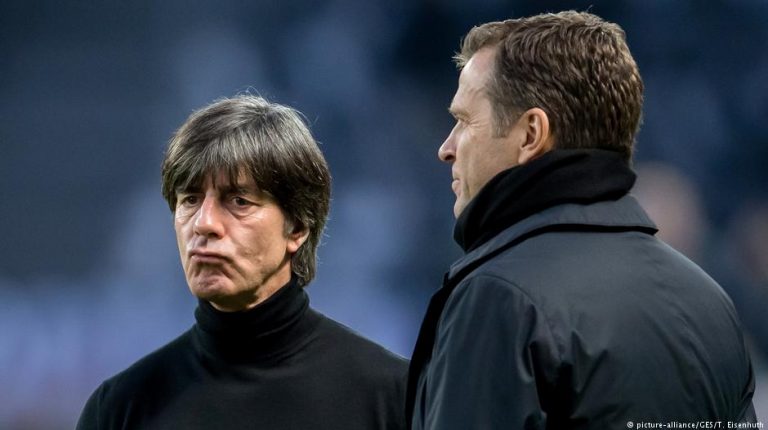 Fall over, get back up, get on with it – that’s the motto of the Germany national football team. Slogans are all well and good but look misplaced after a dreadful year, says DW’s Sarah Wiertz."I'm happy the chapter is finally over," Germany team manager Oliver Bierhoff said as he reflected on 2018. While the whole country can be glad it's over, should that really mean it is considered done and dusted?

The Erdogan scandal, the early World Cup exit, Mesut Özil's retirement, embarrassing World Cup analysis, relegation from tier A of the Nations League: it was, on and off the pitch, the worst year in Germany's football history. And those responsible are just carrying on. For Bierhoff and head coach Joachim Löw it was a year full of mistakes, both of a sporting and communicative nature.

One mistake after another

It was wrong to put faith in a team almost entirely made up of the same World Cup winners from four years ago. It was wrong to stubbornly hold on to possession-based football. It was wrong to play down the Özil and Erdogan topic. It was wrong to only swap out the assistant head coach and give yourself a free ride. It was wrong to wait so long to deliver the long-announced World Cup analysis, which then turned out to be sparse anyway. Delivering it after the association had announced Löw would stay in post was also a mistake.

Everyone makes mistakes, and even those in Germany's most popular sport should be allowed to do so. However, to make so many in such a short period of time and then to arrogantly shrug them off is negligent and had to have been followed by personnel consequences. Next year, everything will be better comes the promise.

The only way is up

Of course it will. It can't get any worse. Germany will most likely play attractive football again. There are too many talented players in the country for it to be otherwise – and Löw has in the meantime decided to play Niklas Süle, Timo Werner, Kai Havertz and Leroy Sane instead of Jerome Boateng, Mats Hummels, Thomas Müller and Nils Petersen.

A start has been made, albeit a late one, but can Löw and Bierhoff really guide Germany back to their old strength in the new year? At least the tasks will be easier than in 2018: no World Cup, no Nations League and one easy qualifying group for the European Championships. Only when the team really delivers can Oliver Bierhoff really turn the page on the 2018 chapter.