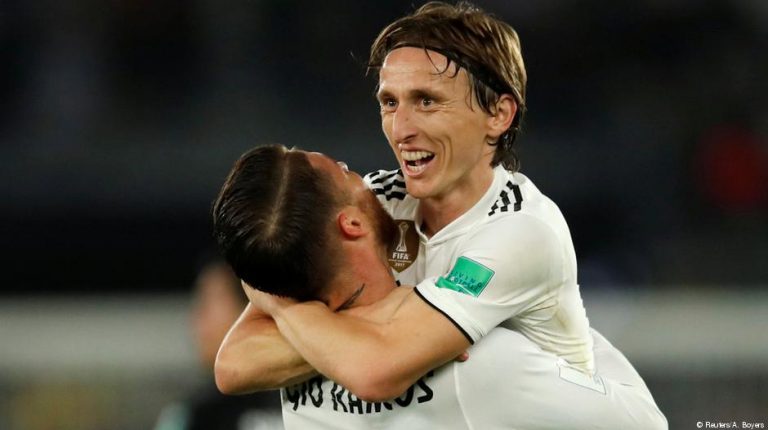 Ballon d’Or winner Luka Modric had a goal and an assist as Real Madrid picked up their third consecutive Club World Cup title. The trophy is Santiago Solari’s first since taking over the club at the end of October.Real Madrid lifted their record fourth Club World Cup title on Saturday after defeating Al Ain of Abu Dhabi 4-1 in the United Arab Emirates.

Luka Modric, who won FIFA's Ballon d'Or earlier this month, had a goal and an assist in the final to help his side win its third consecutive championship in the competition.

The Spanish giants, who defeated Liverpool in May's Champions League final to gain entry into the tournament, are the only team ever to win the competition four times — one more than archrivals Barcelona.

The trophy Santiago Solari's first as Real Madrid coach, having only been appointed to the role in October.

"I'm happy, the players deserve this," he said after the final whistle.

However, Solari's players proved too big a task for the host side to take on, with Real Madrid taking a lead after 14 minutes. Karim Benzema received the ball from Lucas Vazquez and, with his back to Al Ain's goal, passed it to the Modric, who curled the ball past goalkeeper Khalid Essa.

Marcos Llorente gave the European champions a 2-0 advantage in the 60th minute by volleying the ball in from outside the box, and his shot went straight into the bottom left corner. With Real Madrid cruising, Sergio Ramos added the third in the 79th minute, powerfully heading a Modric corner into the back of the net.

Tsukasa Shiotani scored a consolation goal for the Emirati side four minutes before the final whistle, and an own goal by Yahia Nader sealed the result in stoppage time.

Why five African players were shortlisted for Ballon d’Or?

World Championship on land of achievements