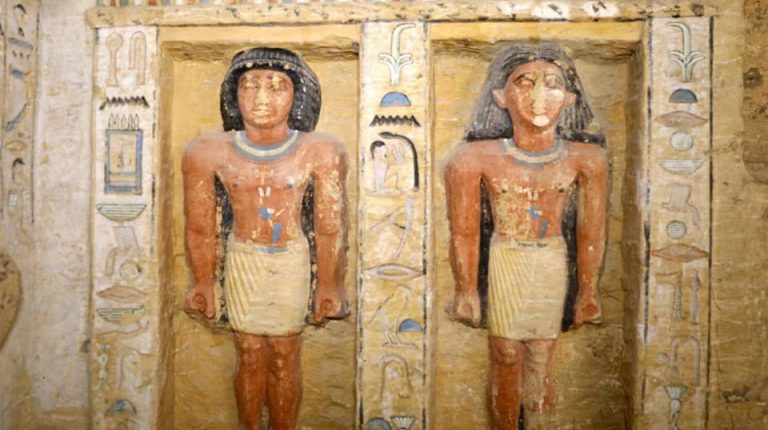 Before the year in which dozens of tombs and cemeteries were discovered ends, the Minister of Antiquities, Khaled Anany, announced on Sunday discovering another Fifth Dynasty tomb belonging to a priest of royal purification called “Wahtye” at the Sacred Animal Necropolis in Saqqara.

The tomb, like the others, was discovered by one of the 25 Egyptian archaeological missions working across the country.

The tomb’s front was discovered earlier in November among other seven tombs, of which four belong to the Old Kingdom, while the other three were reused in the New Kingdom.

Anany asserted back then that there is a remaining tomb which needs more time and effort to be opened and to know which dynasty it belongs to.

Anny described the tomb to be “well-preserved,” explaining that it was found with painted walls and decorated scenes showcasing “the tomb’s owner with his mother, wife, and family, as well as a number of niches with large coloured statues of the priest and his family.”

Mostafa Waziri, secretary-general of the Supreme Council of Antiquities and the head of the excavation mission, explained in the press conference held at the tomb’s location in Saqqara, that “its walls have several coloured inscriptions showing the name of the priest’s wife “Weret Ptah”, and many scenes featuring the deceased with his mother “Merit Meen” and his family as well as scenes depicting the fabrication of pottery and wine, offering scenes, musical performances, the sailing of boats, the manufacturing of the funerary furniture and hunting.”

The conference was attended by ambassadors and culture attaches of several foreign countries. The ministry stated that the excavation work in the area will continue.

The 10-metre- long tomb contains five burial shafts which are still to be excavated, in addition to two false doors, one belonging to the deceased and the second to his mother.

Waziri explained that after the mission removed the waste from the entrance of the tomb, “a lintel on top of the tomb’s door was revealed inscribed with three hieroglyphic lines depicting the name and the different titles of the owner who was the royal purification priest, the supervisor of king Nefer-Ir-Ka-Re and the inspector of the holy boat.”

Deep inside the tomb, the mission found 18 niches displaying 24 large coloured statues which were carved in rock, showcasing Wahtye and his family members. In a lower part of the tomb, another 26 small niches with about 31 status carved in rock were also discovered. However, they showcased an unidentified person standing whom Waziri believes to be “belonging to the deceased or a member of his family.”

Earlier in November, when Anany was announcing the seven tombs discovery, he stated that “Saqqara’s discoveries are far from over, and I believe it is going to surprise us with more for centuries if not decades.”

In the seven tombs, the mission found two large boxes in one of the burials, one has three layers, with total of around 200 mummified scarabs, “which is the first to be found in the whole world,” Waziri said.