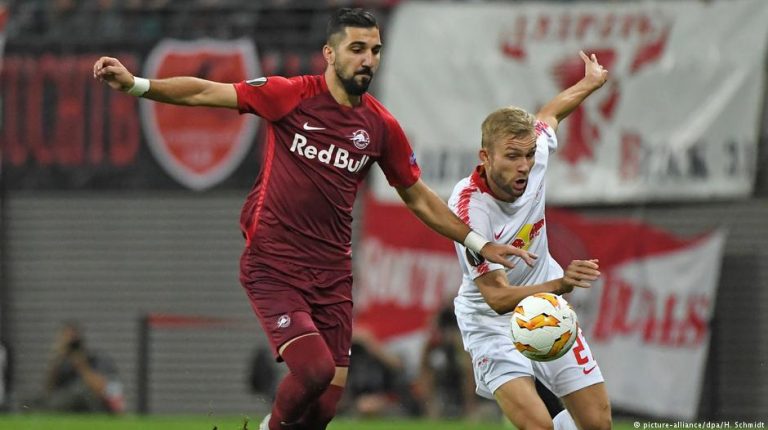 RB Leipzig can take a huge step towards qualification from Europa League Group B when they visit their Austrian Red Bull counterparts in Salzburg on Thursday. RB bosses have dismissed ‘conspiracy theorists.’RasenBallsport Leipzig CEO Oliver Mintzlaff has vehemently dismissed suggestions that club owners Red Bull could impose a Formula 1-style team order when the Bundesliga side travel to Austria to face Red Bull Salzburg in the Europa League on Thursday evening.

While the Austrian team is already as good as through to the knockout round, having won all four of their group matches so far, concerns have been expressed that Red Bull, which has financed the rise of both clubs, could intervene to ensure that their Leipzig-based franchise also progresses.

"Team orders? Nonsense! Where from, then?" said Mintzlaff in an interview with German portal Sportbuzzer, insisting that Red Bull founder and owner Dietrich Mateschitz has "zero point zero per cent involvement in operations, and I have no influence in Salzburg."

The fear that the energy drink giants could influence the outcome of the game is particularly acute in Glasgow, where Scottish champions Celtic are level on points with RB Leipzig and also battling to qualify.

"Are Celtic fans right to fear a Salzburg and Leipzig carve-up?" asked Scottish paper The Daily Record this week. "Because of Leipzig's head-to-head advantage, Celtic must better their rivals' results over the next two games – but there's a palpable sense of concern it could all be in vain."

Rune Bratseth, former Werder Bremen defender and current board member at Rosenborg, the fourth team in Group B, has also expressed concerns, saying: "It's not good for the two clubs that somebody could think: 'Oh yes, they belong together, how can there be a fair match between them?'"

However, RB Salzburg coach Marco Rose – who was born in Leipzig – says he is "insulted" by such "conspiracy theories", while Celtic coach Brendan Rogers has refused to question his opponents' integrity. "Both teams have their pride," said the Northern Irishman. "We saw that in the first meeting between them."

That game saw RB Salzburg, competing as "FC Salzburg" to comply with UEFA regulations, come from behind to win 3-2 in the Red Bull Arena in Leipzig – a battling performance which visibly ruled out any suspicions of a Red Bull team order.

Indeed, the Salzburg players appear determined to step out of the shadow of their German sister franchise and prove their own qualities. "That phase in which we all wanted to get a transfer to Leipzig is over," insisted forward Hannes Wolf.

Scorsese’s The Irishman was watched by 26.4m accounts in its first week: Netflix content chief