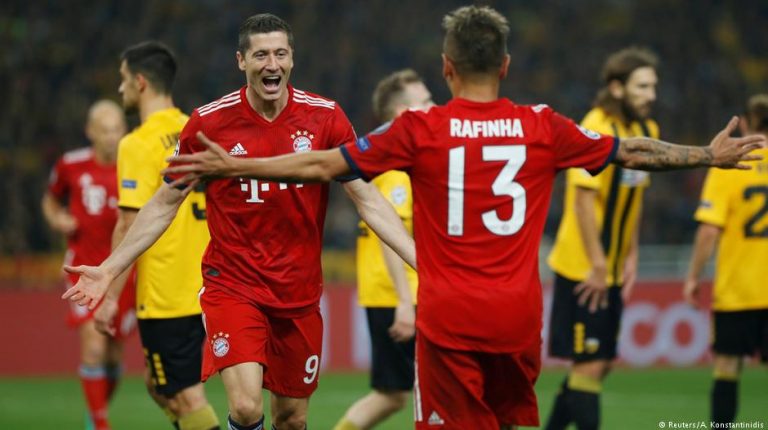 A sputtering Bayern Munich go into their fourth Champions League group-stage match hoping to send a message to Borussia Dortmund. Hoffenheim, meanwhile, need a win to maintain any realistic chance of progressing.It hasn't been an easy start to the season for Bayern Munich head coach Nico Kovac, who moved from Eintracht Frankfurt in the summer to replace the retiring Jupp Heynckes. Sitting third in the Bundesliga standings 10 games into the season is unfamiliar territory for the serial domestic champions, and league leaders Dortmund await them on Saturday evening. Things haven't all gone Kovac's way in Europe either, particularly when they struggled to a 1-1 draw at home to a much less experienced Ajax side.

Still, in second but tied on points with Ajax at the top of Group E, Bayern could clinch qualification for the last 16 with a win on Wednesday — if Benfica also win at home to Ajax.

Given their comparatively sluggish start to the season, including a disappointing 1-1 draw at home to Freiburg on the weekend, Bayern will be out not just to beat AEK on Wednesday, but to also send a message.

"We can't say how many goals there will be or what the result will be, but we want to deliver an exciting performance," Thomas Müller said.

Momentum crucial ahead of Dortmund game

If history is any indication, Bayern could break out and score a few against AEK. In each of the last five seasons, Bayern have won at least one of the two group-stage games against teams that came from pot 4 in the Champions League draw by three goals or more.

At Tuesday's press conference, Kovac agreed that his team needed to win a game by "three or four" goals to really get going, but at the same time, he didn't expect this game to come on Tuesday.

"I expect tomorrow to be as difficult as in Athens," he said, referring to Bayern's 2-0 win in the Greek capital last month.

While there has been a lot of talk about a growing rift between Bayern's veterans and the coach in recent weeks, Kovac insisted that all was well in the camp.

"The atmosphere is good, and we are confident," the coach said.

A comfy win against AEK would be a boost to Bayern's dressing room, especially days ahead of the eagerly-anticipated clash against undefeated league leaders Borussia Dortmund.

In terms of his line-up, Kovac will have to do without the injured Thiago Alcantara and Corentin Tolisso, who are both out for a while. James Rodriguez is a doubt (with a calf problem) and Arjen Robben will not recover from a knock to his knee in time for Tuesday's contest.

Hoffenheim need a result in Lyon

Julian Nagelsmann's side are rock bottom of Group F ahead of a tricky trip across the French border to face Olympique Lyon.

The two sides shared the points in a 3-3 thriller in Sinsheim last month. "We know that we must win on Wednesday, that's how we're approaching the game," Nagelsmann said. "We could mix up the line-up a little; we have plenty of personnel up front."

Winless in the group stage so far, Hoffenheim could put themselves back in striking distance with three points on Wednesday, especially if group leaders Manchester City do them a favor and dispatch Shakhtar Donetsk at home. Lose, though, and any chances of a berth in the last 16 look lost.