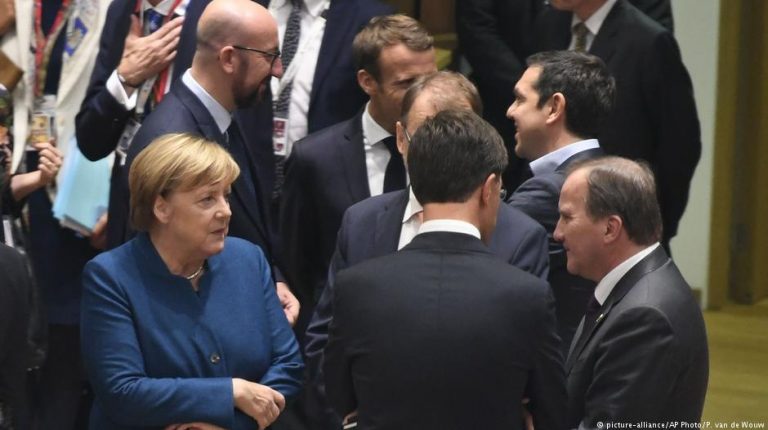 EU leaders have dropped their plan to hold a Brexit divorce deal summit in mid-November. Europe’s Brexit negotiator said much more time was needed for decisive progress to be made.European Union leaders on Wednesday noted that "despite intensive negotiations, not enough progress has been achieved" for an extraordinary summit on November 17-18.

The heads of government said they would call a summit to finalize a Brexit divorce deal "if and when an agreement was in sight," according to an official source.

British Prime Minister Theresa May delivered a 15-minute speech to her counterparts, pitching her vision of how talks could be saved after a dramatic breakdown on Sunday.

May was reported to have said the last stage would require "courage, trust and leadership on both sides" when it came to striking a deal.

EU diplomats said May appeared to show a greater understanding of the EU's concerns, including Ireland's requirement for a "backstop" insurance clause that would mean there would be no hard border between Northern Ireland and the Republic of Ireland.

However, the speech, which was followed by a dinner of the 27 leaders that May did not attend, was deemed to contain none of the substantial new proposals that had been called for by European Council President Donald Tusk.

The EU's chief negotiator, Michel Barnier, said both sides had worked hard, but "we are not there yet."

"We need much more time and we will continue to work in the next weeks, calmly and patiently," he added.

European Parliament President Antonio Tajani, who attended May's address, said he had perceived nothing "substantially new in content," but he also said May had shown the "will to make headway."

Tajani said he had raised the possibility of extending a post-Brexit transition period by a year — to the end of 2021. Such an extension would provide more time to forge a trade deal but would mean the UK retain EU rules for longer, without having a say in any of them.

Such an extension would prove difficult for May to sell to hardline euroskeptic members of her own Conservative party.

The UK is set to leave the EU in March, with fears that a "no-deal" outcome would result in the worst possible economic scenario for both the UK and the EU.

Earlier, German Chancellor Angela Merkel had warned that the EU had to be ready for all outcomes: "That includes the possibility that Britain leaves the European Union without a deal," she said.