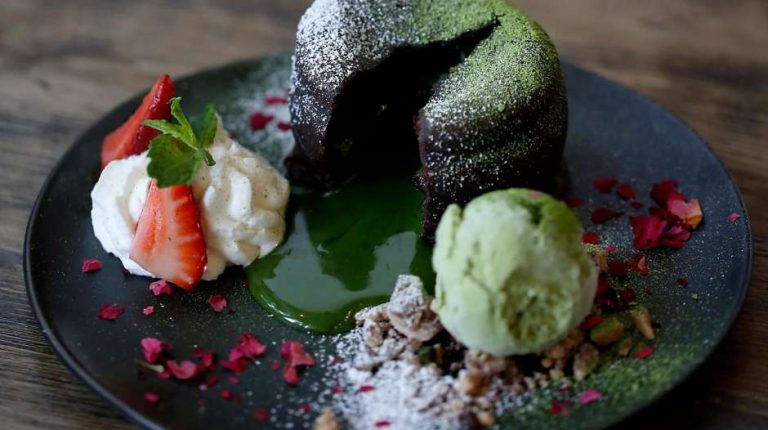 They had me at “King Crab leg.”

That was just the first of the palate-tingling adventures at Kazoku, with a fresh take on contemporary Japanese dining, one can’t argue with the fact that Kazoku brought something new to Egypt’s fine dining scene.

Located in New Cairo, the first thing you notice about the place is it its sleek, modern, minimalist design. Once you pass through the inviting bar area — with its sleek counters lit from within, cosy seating areas — only to be brought down at the sight of a dark light, spacious dining salon, dominated by different shades of brown.

The menu is expertly developed, and the high-end ambience is surprisingly relaxing, with a selection of hot and cold starters, prime cut steaks, signature dishes, while the sushi and drinks both come in a separate menu.

Once seated, we found ourselves under the care of a server who did the place proud, blending finely tuned professionalism with a disarming warmth.

We decided to start with the “Tataki Tenderloin”, and the Alaskan king crab leg, as an entree.

The tataki was seared, covered with soy almonds, along with a Kosho Goma dressing. The dressing is a mixture of the nutty flavour of roasted sesame seeds and the yuzu citrus, accompanied with the intense spiciness of green hot chilli peppers.

While the king crab legs were spectacular, having a sweet tender meat with a succulent flavour is sure to impress. The king crab leg meat is the whole point, as it is meant to be the sweetest and the best, the Bugatti of the shellfish world.

In theory, steak is one of those things that seems very hard to get wrong, however, that’s not the case in Cairo, as finding a place that cooks the perfect steak isn’t an easy task. But Kazoku managed to change that, and now I can confidently say that my search for a perfect restaurant to take people who think they can make a better steak at home, is complete.

The best thing about the place is the fact that they also cook the meat the way you actually order it, so if you order medium-well, that’s what you’re going to get, which is pretty rare around Cairo. Additionally, the large wine collection, including local, and imported red, white, and rose wines, to accompany your steak, was an extremely delightful experience.

We ordered one of Kazoku’s main dishes, seared beef tenderloin steak, and an amazingly cooked steak was placed in the centre of the table in their own serving plates. Our eyes locked in on the crispy brown flesh of the steak with fixed and purposeful stares that, if we had not been humans looking at food, could have been called lustful.

The steak was cooked with miso butter, which is a fermented seasoning paste of soybeans, often with rice or barley added, and was accompanied by wasabi hollandaise sauce.

Finally, dessert seemed a bit too far, we decided to order one photogenic Asian-inspired sweet, matcha lava cake, where Matcha green tea is mixed with white chocolate to create delicate cakes with a molten lava centre. It was served with a scoop of matcha ice cream, but the dessert is so rich, it’s enjoyable on its own.

All in all, it was a remarkable experience, its a new addition to Egypt’s gastronomy scene, the place is considered a fancy restaurant, and comes with a high price tag, a dinner for two including drinks, and dessert, would cost on average between EGP2000 to EGP 3000.