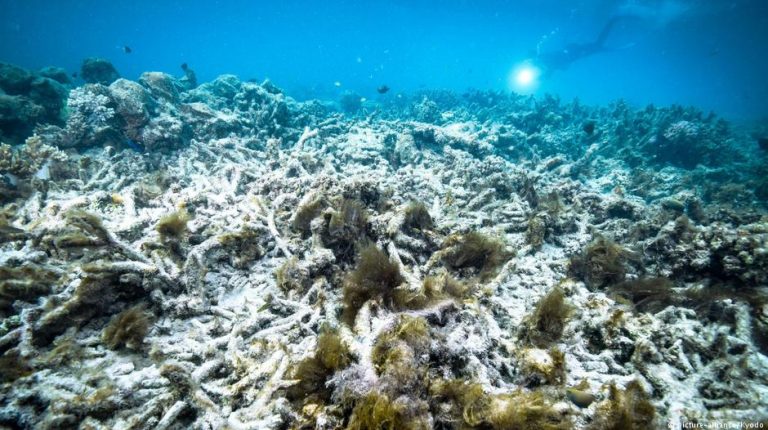 If you want a coral reef, the Bahamas-based startup Coral Vita is the place to go. They’ll grow you one 50 times faster than Mother Nature could. The first clients are already on board. We spoke to one of the founders.So you have a beachfront mansion on a tropical island, the ocean view is gorgeous, the beach is pristine, if only there was a coral reef below those turquoise waters… Well, now you can buy one. Coral Vita is a commercial venture with a decidedly green goal: bringing damaged coral reefs back to life and, if you want it, even growing new ones from scratch.

Gator Halpern, one of the founders just won the UNEP Young Champions of the Earth award for this green endeavor. DW spoke to him about why people might buy a reef, why his work matters and why Coral Vita works so much faster than Mother Nature.

DW: Why would anyone want to restore a reef?

Gator Halpern: Coral reefs are incredibly important ecosystems. They cover less than 1 percent of oceans but they actually support over 25 percent of all marine life. They're really a keystone ecosystem of our planet and they're dying at frightening rates. We've already lost half of the world's reefs in just the past few decades and we're projected to lose over 90 percent of all reefs by 2050. This isn't just an ecological tragedy but a serious socio-economic issue because up to a billion people around the world depend upon these coral reefs for their livelihood.

How does reef restoration work?

You start with coral farming, which has been around for about 15 years. Traditionally it's being done by stringing up coral in a nursery in the ocean and as long as it's a certain fast-growing type of coral, it'll grow in about six months and then you can plant it out there. These projects have shown that you can bring a dead reef back to life but it's been very limited in terms of its impact because it's not a very scalable method. You basically have to build one of those farms next to each reef you're trying to restore and you can basically only grow one genre of coral, these very fast growing species of coral and there is little you can do to ensure that they survive once you plant them. Often after you do they die in the next warm ocean event.

So how is your approach different?

We're building land-based coral farms that incorporate new techniques developed by several research institutes including our partners at the Mote Marine Laboratory in the Florida Keys as well as the Hawai'i Institute of Marine Biology. They are basically facilities with a bunch of tanks that we can pump seawater through and control the growing conditions. That allows us to do several things: one of them is that we can accelerate coral growth rates by up to 50 times compared to how fast they grow in nature by using a process called micro-fragmenting.

Our approach also allows us to train the corals to be more resilient against warming and acidifying oceans that threaten their survival. We can crank up the heat or the acidity in the tanks and the corals can learn to survive and build up resilience against those climate change conditions. We can also see which individual corals fare best in a warmer ocean climate and take those genotypes that are naturally most resilient and have them seed the next batch of coral.

This technique has been dubbed assisted evolution. Our farms are also much more scalable. We can just add more tanks to the farm. We can grow hundreds of thousands or even millions of coral from a single facility if it's large enough, and distribute them around a region. Having those economies of scale to be able to provide coral for restoration projects from a single farm is a new approach.

Can you explain how micro-fragmenting works?

Corals grow in colonies of individual polyps, so each animal is a polyp and a single coral you see can actually be hundreds or thousands of these polyps. What we do is break the coral apart into single polyps and space those tiny pieces out. Once they're in that small form they actually grow much quicker and fuse back together into larger coral. We repeat this process over and over, breaking the coral apart, fusing them together, breaking them apart, fusing them together.

As a result, we keep the coral in all-out growth mode and they grow much faster. That's particularly important for slow-growing species like brain coral. They form the foundation of a reef structure but in traditional reef restoration projects people haven't been able to grow them because they grow very slowly. We're able to incorporate those corals, which is important because we're trying to take a much more holistic approach to reef restoration and want to use as many species as we can.

So assuming you started with a blank slate, how long would it take to grow a lively, healthy reef?

If we're starting from scratch, from just collecting corals that we're going to start growing in our farm, it'll be about six or eight months before we're planting our first batch of coral into that reef. It would take around a year to have a kind of reef that looks pretty awesome, that fish are coming back to, that mimics what a real reef would be out there. The key is: we're only trying to put corals into places where they're going to survive so not every reef is able to be restored. We try to work in places where the local stressors to reefs, things like overfishing and pollution have already been lessened before we go and restore a reef so that we're not putting it in a place where it has no chance to survive.

Who do you see as your potential clients?

We're actually a for-profit business, which is something new in reef restoration. Until now, it has been totally grant-funded and donation-funded but we are selling the service of reef restoration to stakeholders that benefit from having a healthy reef. That could be wealthy people that just want a reef off their shore but we're seeing a lot of interest from hotels and resorts or real estate developers that are building new developments. There are also companies like cruise lines.

When reefs are destroyed from dredging or building a cruise port, they can pay us to restore the reef that they've destroyed. There has also been interest from governments and international development agencies. Those are the kind of big players that allow us to reach the scale that's needed when you think about the magnitude of reef degradation and how huge an issue this problem is.

Gator Halpern is co-founder of Coral Vita. Before starting his reef restoration business, he earned a master's degree in environmental management from Yale University. He also worked on international development projects in Peru, Brazil and South Africa and served as a fellow for the World Wildlife Fund's Global Marine Program.

The interview was conducted by Harald Franzen and has been edited for length and clarity.