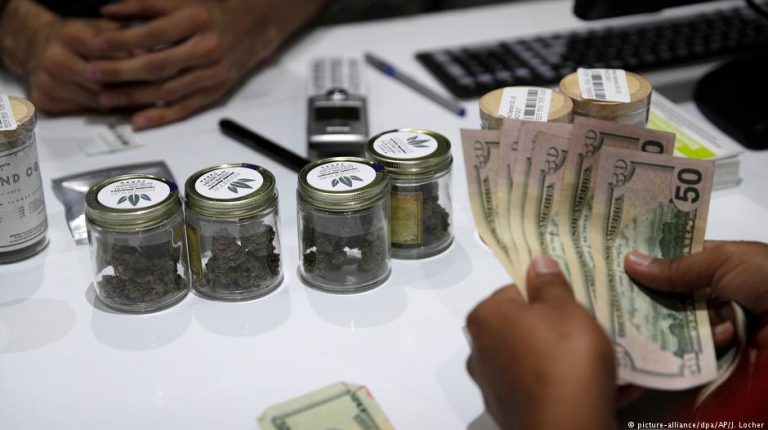 The stock market has a new star sector: cannabis companies. The drug is conquering the United States and the legalization campaign is also pulling some big investors into the business, including Coca-Cola.The grass business has traditionally conjured the furtive exchange of green crumbs in small plastic bags. But with a growing body of research into the drug’s medical benefits and cannabis products approved for both medicinal and recreational use in some US states and Canada, marijuana companies are winning over more investors.

BDS Analytics estimates that global spending on cannabis products will rise 230 percent to $32 billion (€25 billion) by 2020.

Canopy Growth went public in May, followed in July by Canadian firm Tilray, whose market valuation has exploded 800 percent to $14 billion.

Shares of all listed marijuana companies rose 96.56 percent in August alone. For comparison, the financial sector gained 1.13 percent over the same period and the broad S&P 500 index, which lists 500 companies across 11 sectors, is up just 0.74 percent.

Alcohol and tobacco companies in particular are keeping an eye on the companies, says CEO of Medical Marijuana, Stuart Titus.

Constellation Brands, behind the Corona beer brand, recently invested $4 billion in Canopy Growth and in early September it was reported that tobacco company Altria was “exploring its options.” Coca Cola has also expressed interest.

Tobacco and alcohol firms want in

The health factor plays an important role in this investment decision. Alcohol, sugary drinks and cigarettes have an increasingly bad reputation as consumers focus more on their health.

Cigarettes used to be everywhere in US society. Fifty years ago, 42.4 percent of US adults still smoked. Since then, this figure has fallen by more than half to an all-time low of 17.8 percent in 2014.

That’s why cannabis investor Alan Valdes says the cannabis market is so attractive to these corporations.

“While tobacco products are getting harder and harder, marijuana is getting easier,” he says. For example, companies could offset the revenue from the tobacco business.

Valdes himself invests in both RXMM, a manufacturer of medical marijuana, and Diego, which sells marijuana as a luxury food. He believes drug stores like US pharmacies and supermarkets, like Walgreens and Wegman, will soon sell cannabis-based products.

Pharmaceutical companies are also watching the market. No wonder, as cannabis could take a large part of the revenue from medicines.

Titus estimates that soon, 40 percent of all drugs could be replaced by cannabis products and this means there is great resistance to legalization among industry players.

So far, the Food and Drug Administration has only approved a few products as medicines. However, according to a recent analysis of medical cannabis, total US sales are expected to grow to $10 billion by 2022.

Interest in marijuana stocks is largely based on the assumption that cannabis will soon be legalized throughout the United States. It is currently legal in 30 states, but experts like Titus expect it to be legal nationwide by 2020.

Since the summer, cannabis use in Canada is legal not only for medical purposes, but also for recreational use.

The industry has many advocates on the US political scene. Cynthia Nixon, for example, has campaigned on a pro-legalization ticket against Andrew Cuomo for the post of governor of the state of New York.

In the White House, opinion is split. Attorney General Jeff Sessions insists marijuana is dangerous, and has said repeatedly in recent weeks that it should not be legalized.

President Donald Trump, however, apparently disagrees. He wants to help Congress end the ban on marijuana.

Valdes isn’t surprised. “He’s a businessman,” Valdes said, noting that Trump will have to fill some of the fiscal hole left by his 2017 tax cuts.

“We believe the market will contribute to economic growth,” says Titus.

In the US, up to a million jobs could be created in the industry. Trump will not want to miss that.

Lissa:Critical take on modern medicine and the Arab Spring