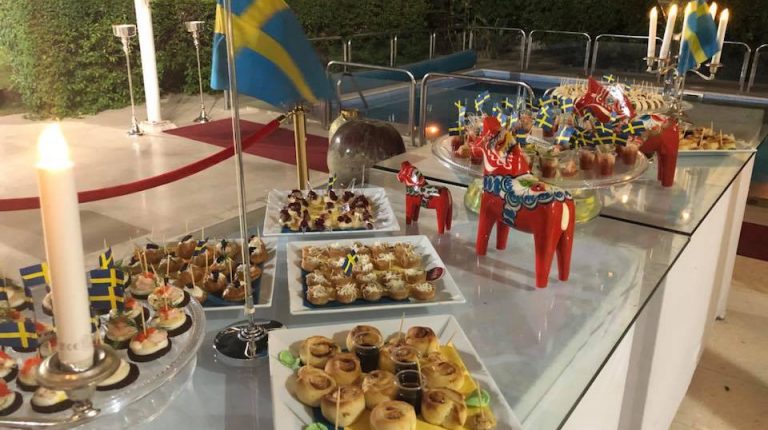 The Swedish embassy in Egypt, in collaboration with L’Aubergine restaurant, will kick off a Swedish food week event on Tuesday, the ambassador of Sweden to Egypt told Daily News Egypt, adding that his embassy pays remarkable attention to the cultural aspects of cooperation with Egypt during the current period.

“The Swedish embassy’s month feature is called Creative Sweden 2018, so we focus very much on art, food, creativity,” elaborated the ambassador, noting that he will travel to El Gouna at the end of this week to attend the El Gouna Film Festival 2018.

The ambassador affirmed that he encourages small restaurants like L’Aubergine as they are very accessible and affordable for everyone to attend and taste the Swedish food, adding, “we want to reach Egyptians from their various categories. Our food is tasty and delicious.”

For his part, Mahmoud Kasparov, chef at L’Aubergineh restaurant said that there is a huge difference between Swedish and Egyptian food, noting that “Swedish food is totally different. Swedish people are used to eating hard food which suits the cold environment they live in such as caviar, salmon, brown bread, and others.”

Kasparov told Daily News Egypt that Swedish food has its own taste that differs even from other European food, adding that Swedish meatballs are very unique. What also stands out from other European food is the Swedish welcome break called the Fika, which is basically a coffee break that’s more about socialising than drinking coffee and something sweet is also supplied.

“I lived all my life cooking Swedish meatballs with a different way of cooking them from how they should be done, but after meeting the ambassador of Sweden in Egypt Jan Thesleff was a chance to change the way I cook meatballs to the right Swedish one,” said Kasparov.

Swedish food relies on butter and onions, which differs from French and Italian cuisines that use garlic and olive oil, added Kasparov.

Just like ketchup and mustard, lingonberry jam is widely used to accompany a variety of dishes, from meatballs, pancakes to porridge, and black pudding (blood pudding). Despite its sweetness, it is rarely used on bread, according to the official Sweden website for culture.

Thanks to Sweden’s Right of Public Access (Allemansrätten) Agency, which gives everyone the freedom to roam and enjoy nature, many Swedes grow up picking lingonberries in the forest, and using these tiny tart red fruits to make a jam-like preserve, added the website.

“In addition to bread and butter, you’ll often find a type of crispbread (knäckebröd) served alongside your main meal. This is what the Swedes tend to reach for. Once considered poor man’s food, crispbread has been baked in Sweden for over 500 years, can last for at least a year if stored properly, and remains among the most versatile edible products,” noted the website.

The Swedish National Board of Health and Welfare (Socialstyrelsen) Agency ran a campaign in the 1970s suggesting Swedes should eat six to eight slices of bread a day, including crispbread. This comes in various shapes, thicknesses, and flavours, with entire store shelves devoted to it. Crispbread can be topped with anything from sliced boiled eggs, and caviar squeezed from a tube for breakfast; to ham, cheese, and cucumber slices for lunch; to just plain butter along with your dinner.

Egypt can benefit from our e-governance experience: Estonian ambassador

Remembering Camille Lepage: The lady with no redlines