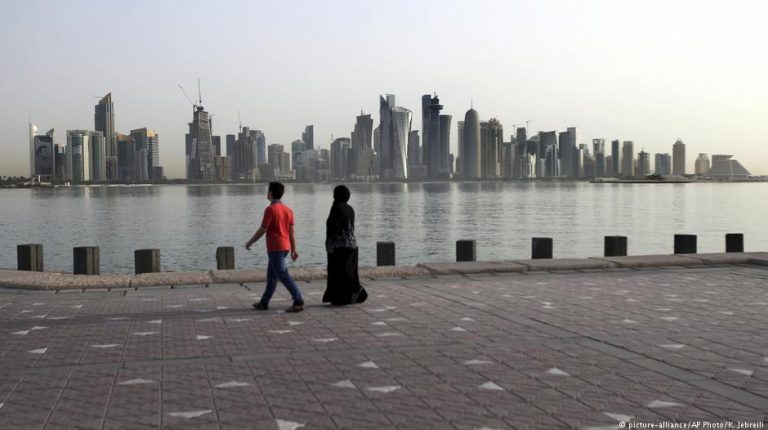 The International Court of Justice has ordered the United Arab Emirates to reunite Qatari families affected by its policies. Abu Dhabi broke diplomatic ties with its neighbor as part of a Saudi-led effort in 2017.The International Court of Justice (ICJ) ruled on Monday against the United Arab Emirates (UAE) and in favor of Qatari citizens’ rights, in a case that dealt with the consequences of last year’s Saudi-led campaign to isolate Doha.

The UAE, Bahrain, Egypt and Saudi Arabia severed ties with Qatar on the grounds that the small Gulf nation had been supporting terrorism, an accusation the Qatari government has vehemently denied.

Doha submitted the request to the ICJ to impose emergency measures against the UAE last month and accused Abu Dhabi of breaking the 1965 International Convention on the Elimination of All Forms of Racial Discrimination (CERD).

Qatar told judges at The Hague that during the year-long blockade, the UAE had spread a “climate of fear” among Qataris living in its territory, splitting families and causing “substantial pain.”

The UAE’s ambassador to the Netherlands, Saeed Alnowais, told the court last month that Doha was “mounting a public relations campaign against these states that have been most critical of its policies”.

“Qatar has failed to provide any evidence of mass expulsions or deportations or any specific actions to interfere in the enjoyment by Qataris of their civil, property or business rights,” Alnowais added.

But in a narrow vote, with eight judges in favor and seven against, the court told the UAE to allow families that include Qatari members to be reunited and to ensure that Qatari students living in the Emirates are given the chance to complete their education. The ICJ’s decision was provisional but binding.

Qatar: ‘Long road for our rights’

Doha celebrated the court’s decision on Monday. Qatar’s Foreign Ministry spokeswoman Lulwa al-Khate welcomed the ruling, saying that her country “was not seeking to escalate the dispute with the Emirates, but to repair the prejudice imposed on its citizens”.

“This is only the first step on a long road to defend our rights, but at the same time this sends an early strong signal that there will be no tolerance shown to countries that take arbitrary measures against Qataris,” al-Khate told Qatari state media.

The UAE defended previous assertions that the ICJ had no authority to hear Qatar’s case and reiterated the claim that the situation for Qataris living in the country today was different from a year ago.

UAE Foreign Minister Anwar Gargash noted that the court’s decision represented only “provisional measures” and that a final ruling on the whole case was still to com.

As the United Nations’ arm for legal disputes between states, the ICJ can deliver binding verdicts, but it has no powers to enforce them. As Abu Dhabi pointed out, no date has yet been set for the case to be heard in full and the final ruling could take months or even years to be delivered.

The confrontation between Qatar and its neighbors began in June 2017, when near-simultaneous announcements by Saudi Arabia and its allies Bahrain, Egypt and the United Arab Emirates were released to break diplomatic ties with Qatar.

They accused Doha of supporting “terrorists” and cozying up to Saudi Arabia’s Shiite archrival Iran. As a result, maritime borders were shut, air traffic suspended and Qatari citizens were expelled. Doha’s rivals also demanded that it shut down the Al-Jazeera media network.

Since then, Qatar has leaned on its foreign alliances for support, in particular Iran and Turkey.