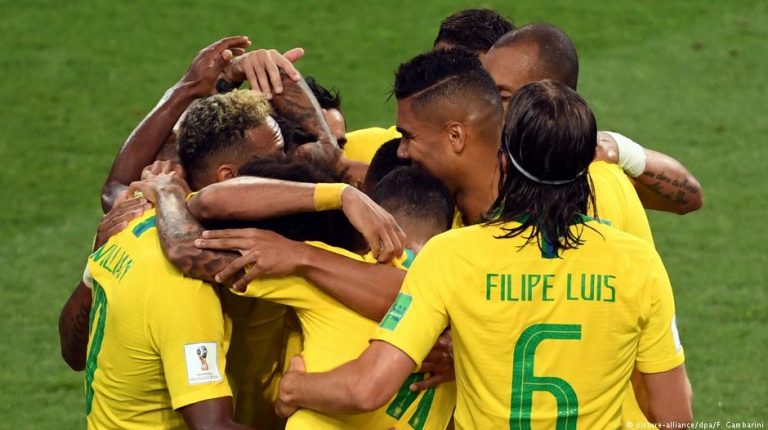 Brazil’s routine victory over Serbia confirmed their status as Group E winners, while Switzerland finish runners-up despite a draw with Costa Rica. The sides face Mexico and Sweden in the round of 16, respectively.Serbia 0 – 2 Brazil
(Paulinho, 36' – Silva 69')

World Cup day 13 had no additional surprises in store as Brazil and Switzerland secured their place in the last 16. An upset was always unlikely, with Serbia needing a win against the five-time world champions to usurp them in the knockout stages, and Switzerland taking on last-placed Costa Rica.

Brazil gave Serbia an uphill task in the 36th minute; Coutinho finding his Barcelona teammate Paulinho on the run to poke home from close range. The outstanding Vladimir Stojkovic kept Serbia in the game with a string of excellent second half saves and could do nothing about Thiago Silva doubling Brazil's lead in the 69th minute. The Paris Saint Germain captain was the first to arrive at an outswinging Neymar corner, his header all but confirming his side's place in the last 16.

Switzerland, meanwhile, had victory snatched from them in the dying moments. Bryan Ruiz's penalty struck the underside of the bar but bounced back off the head of goalkeeper Yann Sommer and into the net to earn the nation a hard-fought draw.

Switzerland twice led, first through Blerim Džemaili, who smashed home from close range after the ball was headed down to him, and then Drmic, who thought he'd sealed three points in the 88th minute. Costa Rica's equalizing goal, scored by Kendall Watson, meant that every team in the World Cup registered at least once in the competition.

Brazil face Mexico in the last-16, while Switzerland take on Sweden for a spot in the quarterfinals.

90' – GOAL! We spoke too soon. Costa Rica level the scores moments later and it's from the spot. Ruiz's effort slaps the underside of the bar and is one its way out before it hitting Sommer on the head and spinning back into the net. A monent of comedy to end a match that had it all.

88' – GOAL! And Switzerland ensure there are no upsets whatsoever with a late goal from Drmic. It's not enough to take them top, though.

86' – Neymar goes close! He looks desperate for a goal in this game. The PSG forward collects the ball wide on the left and starts bobbing and weaving infield. Realising he's being shut out, he slips a smart backheel to Fernandinho. He, in turn, lofts one back over the top for his teammate and Neymar really should score. Excellent goalkeeping for the zillionth time from Stojkovic.

80' – Renato Augusto joins the aforementioned party at the expense of Coutinho. The Barcelona playmaker has been breathtaking at times, here. His pass for the opening goal was a moment of genius. He's removed either in order to spare his legs, or to avoid a clobbering from a frustrated Serb, one assumes.

76' – Ljajic is hooked for Zivkovic. That's a Serbia sub, if you hadn't gussed already.

75' – As can be expected, the sting's been taken out of this game somewhat. Nothing spoils the party like one team totally spoiling the party.

68' – GOAL! Silva has surely put the group to bed with that one and it's a simple finish. The PSG captain gets to a Neymar corner first to head home from close range. The Serbs had been growing into this half and will rue those missed chances even more now.

64' – Agonizingly close! Serbia really should be level now. It's Mitrovic at the heart of things again as he sends a towering header into the arms of Becker. A player that good in the air should not be missing those.

61' – So close from Serbia! Perhaps buoyed by the Costa Rica news, Serbia fashion a great opportunity! A dangerous ball is whipped in from the right and Becker can only palm it away. His parry falls directly to Mitrovic whose header is blocked on the line by Silva. Painfully close.

56' – Costa Rica equalize through Watson. It does nothing to the group, though. Serbia have to win if they want to upset the Brazil-Switzerland duopoloy at the top of Group E.

56' – The resulting corner is cleared and Brazil break at lightening-speed. Neymar is sent clear through on goal and should score but Stojkovic bails his team out with a good save with his feet. Brazil corner.

55' – Serbia go close! Malinkovic-Savic whips in a deadly-looking ball and it's cleared, just, over the bar by Silva before Mitrovic can reach it.

52' – Brazil go close after Willian is released down the right-hand side. he jinks this way and that, before smashing a low cross into the box from the byline. That only needed a touch!

46' – Both second halves get underway in Russia. Serbia can still go through but need to score twice against Brazil to leapfrog them to a place in the last-16. It's unlikely, sure, but anything can happen in a World Cup. Don't believe me? Go and check the Germany score!

45' – Paulinho surges through the Serbia defense with brute force. He manages to get in behind but he's too wide to shoot. In the end, his cross is a poor one and is gratefully gathered by Stojkovic. The referee brings an end to the half as the keeper clears.

36' – GOAL! Brazil take the lead through Paulinho after Coutinho sends him clear with a delicious ball over the top. The goalkeeper comes charging out to claim the it but Paulinho stretches a leg to get their first and lift it over him. Serbia had that coming after repeatedly allowing Brazil room in behind.

31' – GOAL! Switzerland take the lead in Nizhny Novograd. Dzemaili firing home from close range after a cross is headed down to him. They go clear at the top of Group B with 7 points.

29' – Another good chance goes begging for Brazil. Jesus is at the heart of things again as Silva sends him clear on goal with a stunning pass from the back. He bides his time and dummies a shot to send a defender flying. He cuts inside but sees his shot blocked. He just might regret that.

25' – The first big chance of the match! Jesus dances his way into the box from the right flank and is eventually dispossed by Malinkovic-Savic. Neymar latches onto the loose ball and fires a fierce shot at goal. The angle is tight, though, and Stojkovic parries. It's coming…

23' – Serbia are up against it a little, at the minute. They're deep and chasing shadows in their own half. They're hanging on but they'll need to do better when they get hold of the ball. It's coming in waves and Brazil are growing into this game.

20' – Lovely play from Paulinho, who chips a deft first time ball over the back-peddling Serbia defense and onto the toe of Jesus. He can't pick out a cross, though, and Serbia clear.

15' – Just on Marcelo. quickly. Brazil will be praying it's nothing too serious. The Real Madrid man brings a lot to his team at both ends of the pitch. As irreplaceable a full back as they come.

12' – Fagner is lucky not to get a yellow card, there. Kostic gets the better of him down the right flank and the Corinthians right back pulls him back by his arm.

9' – Marcelo gets a dressing-down from the referee after leaving the field of play without permission. He's clearly in pain, however, having taking a knock challenging for a header, and now hovers near the touchline waiting to be allowed off the field while play continues. Luis, his replacement, is eventually waved on after the ball is kicked out for a throw-in.

3' – Lightening start from Brazil, who really should be ahead after Neymar feeds Jesus down the left channel. The little Manchester City striker races clear to go one on one with the keeper but has his shot expertly saved. Long evening ahead for the Serbs?

1' – We're off! Serbia taking on Brazil in Moscow while Switzerland hope to continue their fine form against Costa Rica in Nizhny Novgorod. Huge 90 minutes coming up.

19.45 – The drama isn't over yet, with the third and final games of a nail-biting Group E about to get underway. Brazil top the group with Switzlerland behind them on goal difference but Serbia can also go through should they defeat the five-time World Cup champions in Moscow. Can Neymar, Coutinho and co. do the business or will Serbia surprise us all?

Switzerland will be confident of making the last-16 after some impressive performances in their opening two group games, they face a Costa Rica side yet to collect a single point at this World Cup, having been one of the surprise packages in Brazil four years ago. It's all to play for in Group E!