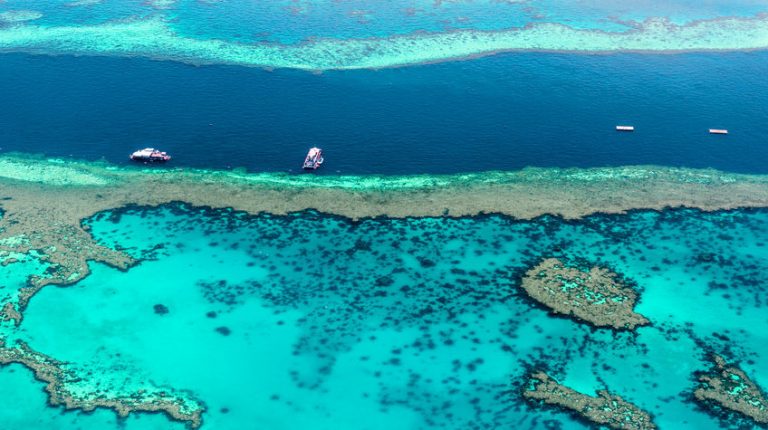 The world’s largest reef system, the Great Barrier Reef (GBR), saw five death waves of coral reefs, largely driven by changes in sea level and associated environmental change during the past 30,000 years, according to a new international study recently published in Nature Geoscience. The Great Barrier Reef looks like a massive sponge cake and lies on Australia’s eastern coast.

The study, which was led by Jody Webster from the University of Sydney, said that over millennia, the reef adapted to sudden changes in environment by migrating across the sea floor as the oceans rose and fell. The study is the first of its kind to reestablish the evolution of the reef over the past 30 millennia in response to major, sudden environmental change.

The research was conducted over 10 years, showing that the reef is more resilient to big environmental changes such as sea level rise and sea-temperature change than previously thought, but also showed a high sensitivity to increased sediment input and poor water quality.

It remains an open question as to whether its resilience will be enough for it to survive the current worldwide decline of coral reefs, said Webster from the University of Sydney’s School of Geosciences and Geocoastal Research Group. He added, “our study shows the reef has been able to bounce back from past death events during the last glaciation and deglaciation,” explaining, “however, we found it is also highly sensitive to increased sediment input, which is of concern given current land-use practices.”

Geologists consider the last interglacial period to be an important comparative period because temperatures and sea levels were higher than now but similar to where the Earth might be headed if carbon dioxide emissions remain unchecked.

Using data from geomorphic, sedimentological, biological, and dating information from fossil reef cores at 16 sites at Cairns and Mackay, the study covered the period from before the last glacial maximum, the last time period during the last glacial period when ice sheets were at their greatest extension, about 20,000 years ago, when sea levels were 118 metres below current levels.

Before that time, there were two widespread death events (at about 30,000 years and 22,000 years ago) caused by exposure of the reef to air, known as subaerial exposure, as sea levels dropped over the millennia. During that time, the reef moved seaward trying to adapt with the falling sea levels.

According to the study, the deglaciation period after the last glacial maximum witnessed a further two reef-death events at about 17,000 and 13,000 years ago because of the rapid sea level rise. These two reef-death events were accompanied by the reef moving landward, trying to keep pace with rising seas.

The researchers analysed the core samples and collected data on sediment flux, and they found that these reef-death events from sea level rise were likely associated with high increases in sediment.

The final reef-death event, about 10,000 years ago, from before the emergence of the modern reef about 9,000 years ago, was not associated with any known abrupt sea level rise or meltwater pulse during the deglaciation, according to the study. But the event appears to be associated with a massive sediment increase and reduced water quality alongside a general rise in sea level.

The findings of the study suggested that the reef was able to reconstruct itself over time due to continuity of reef habitats with corals and coralline-algae and the reef’s ability to migrate laterally at between 0.2 and 1.5 metres a year. The led author of the study believed that it was unlikely that this rate would be enough to survive current rates of sea surface temperature rises, sharp declines in coral coverage, year-over-year coral bleaching or decreases in water quality, and increased sediment flux since European settlement.

“I have grave concerns about the ability of the reef in its current form to survive the pace of change caused by the many current stresses and those projected into the near future,” Webster said.

Previous studies established a past sea surface temperature rise of a couple of degrees over a timescale of 10,000 years. However, current forecasts of sea surface temperature change are around 0.7 degrees Celsius in a century. Webster further explained, “our study shows that as well as responding to sea level changes, the reef has been particularly sensitive to sediment fluxes in the past and that means, in the current period, we need to understand how practices from primary industry are affecting sediment input and water quality on the reef.”

Moreover, another previous study, which was published in the Proceedings of the National Academy of Sciences (PNAS), determined acoustic links between coral reef degradation and reef fish recruitment. According to the study, the widespread damage to coral reefs increased by the absence of fish communities that could potentially promote reef recovery.

In April, Nature, the international journal of science, published a study saying that corals on the Great Barrier Reef experienced a catastrophic die-off following the extended marine heatwave of 2016, transforming the ecological functioning of almost one-third of the 3,863 reefs that comprise the world’s largest reef system.

Findings of the study reinforce the need for risk assessment for reef ecosystem collapse, especially if global action on climate change fails to limit warming to 1.5-2 degrees Celsius above pre-industrial revolution levels.

The researchers of the study found that although many corals died immediately from the heat stress, others died more slowly following the depletion of their zooxanthellae, the yellowish brown symbiotic algae that live within most reef-building corals.

Zooxanthellae are single-celled organisms that are able to live in symbiosis with marine invertebrates such as corals, jellyfish, and sea anemones.

Coral death is highly correlated with the amount of bleaching and level of heat exposure, with the northern third of the Great Barrier Reef most affected. The coral die-off also led to radical changes in the composition and functional traits of coral assemblages on hundreds of individual reefs, with mature and diverse assemblages transformed into more degraded systems.

The authors of the study noted that a full recovery to the pre-bleaching assemblages is unlikely to occur, because many surviving coral colonies continue to die slowly, and the replacement of dead corals will take at least a decade, even for fast-growing species.

Moreover, the Great Barrier Reef experienced severe bleaching again in 2017, causing further extensive damage. As such, coral reefs throughout the tropics are likely to continue to degrade until climate change stabilises, allowing remnant populations to reorganise into heat-tolerant reef assemblages, according to the paper.

Speaking to Daily News Egypt, Terry Hughes, from James Cook University in Australia and a co-author of the study, said, “our study found that one in every three corals on the Great Barrier Reef, the world’s largest reef system, died following bleaching in 2016. In the following summer in 2017, another 20% died, bringing the total loss to close to half of the corals.”

Hughes added that some types of corals had much higher death rates than others, changing the mix of species. “Branching corals died off the most, reducing coral habitat for fish and other species that depend on corals for food and shelter.”

He explained further that it takes 10 years at least for the fastest corals to recover, and much longer to replace 50 or 100-year-old corals that have died. He expected the “mix of species to continue to change as global warming intensifies.”

The GBR supports an important tourism industry that employs 65,000 people. Hughes believes that the only way to protect the GBR from global warming is to immediately reduce greenhouse gas emissions, and to reach the Paris Agreement target of no more than 1.5-2 degrees Celsius of average global warming. “If we can achieve that target, we’ll still have a GBR, but with lower diversity and a very different mix of mainly heat-tolerant species,” he added.

To reach the limit of warming to 1.5 degrees Celsius, we need to fully eliminate our emissions of the main cause of warming: carbon dioxide, according to Joeri Rogelj of the International Institute for Applied Systems Analysis (IIASA). He added to Daily News Egypt, “this means that global carbon dioxide emissions have to be brought to zero levels. This does not mean that no carbon dioxide is produced at all. However, it means that we need to actively remove as much carbon dioxide from the atmosphere as we are putting into it.”

Rogelj added that there are various ways and strategies to achieve that goal. “Two aspects that jump out is the need for reaching zero global carbon dioxide emissions by roughly mid-century and a need to strongly limit energy demand by adopting efficient and sustainable lifestyles,” he said.

Deaths related to heat waves could expect to rise by 2080

Global warming could be limited to 1.5 degrees Celsius by changing consumption behaviours: study