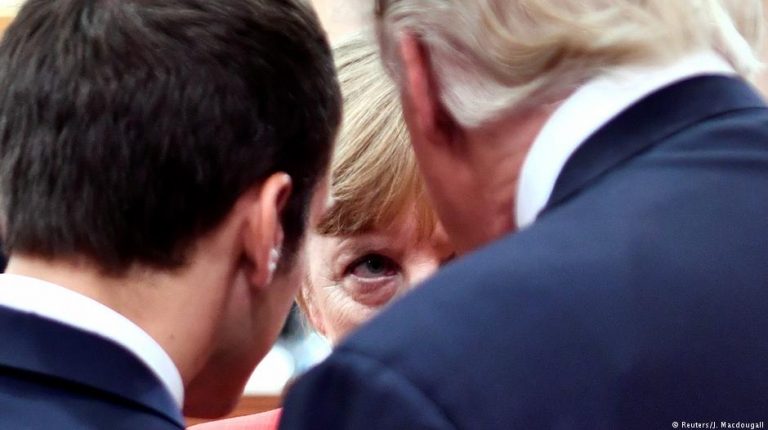 The world is a complicated place, but the immutable laws of international trade have often served to simplify it. That appears to be changing fast, and Germany is in the firing line as risks of a global trade war rise.In the 1976 US movie Network, a long-time news anchor goes rogue and begins leading his broadcasts with his personal — and increasingly popular — views. When he hears that the station is to be bought by a Saudi Arabian conglomerate, he rails against the deal live on air and is subsequently hauled up to the top floor to meet the chairman of the board.

“You have meddled with the primal forces of nature, Mr. Beale,” he tells the anchor angrily. “There are no Russians, there are no Arabs…there is only one holistic system of systems, one vast and immane, interwoven, interacting, multivariate, multinational dominion of dollars. Petro-dollars, electro-dollars, multi-dollars, reichmarks, rins, rubles, pounds, and shekels. It is the international system of currency which determines the totality of life on this planet.”

Those operating in the business of international trade will tend to agree with the essence of that sentiment but that said, there is little point denying that those corporate forces of nature are being meddled with left, right and center these days.

President Donald Trump’s ‘America First’ policies have stirred up trade conflicts around the world. Factor in several global geopolitical tensions connected to that, be it the proxy war in the Middle East between Saudi Arabia and Iran or the ongoing jostling between the EU, the USA and Russia, and the picture becomes ever more complicated.

As the world’s third largest exporter, with deep trading links established in practically every corner of the world, Germany is situated right on the fault-line of any potential future earthquake in global trade.

Its business community knows this only too well; despite years of seemingly endless positive economic updates and statistics in the country, business confidence in Europe’s largest economy is “shrinking”, according to Volker Treier, foreign affairs specialist with the Association of German Chambers of Industry and Commerce (DIHK).

“It always starts with the mood,” he told DW. “What we see these days in our own surveys is that expectations are shrinking. From relatively optimistic levels, they are shrinking. It doesn’t necessarily mean we are heading for a downsizing of the economy or of exports. But these are more than just grey clouds in the sky.”

Earlier this month, the influential ZEW economic sentiment indicator for Germany reported the lowest levels of business confidence in the country in almost six years. Combined with reports of falling industrial orders, it reflects the uncertainty over how several ongoing global issues could yet play out.

On Monday, Germany’s long-serving Chancellor Angela Merkel spoke in grave terms about the way in which the once rock-solid, multilateral international order has begun to seemingly come apart. “International agreements and institutions are being weakened,” she said. “This is worrying, since our multilateral global order comes from the lessons we learned from the terrible world wars of the last century.”

This might all seem a little over the top when one looks at the vital signs of the German economy — consistently low unemployment, solid growth rates and a whopping budget surplus — but it doesn’t take a genius to figure out why the clouds appear to have become darker all of a sudden.

‘The Germans are bad, very bad’

This Friday (June 1), the EU’s exemptions on the 25 percent steel and 10 percent aluminum tariffs imposed by the US government are set to run out. Should the EU and US fail to reach an agreement, what is currently being described as a trade conflict could escalate into an actual trade war. Cars could easily come into the firing line and Germany, with its monumental car and mechanical engineering industries, has more to lose than any other country.

Then there are the issues that German companies are experiencing in the Middle East. Trump’s decision to pull the US out of the Iran nuclear deal means the imposition of economic sanctions on the country, and potentially on any European firms which continue to do business there.

European determination to uphold the Iranian deal has already brought issues for several German firms in the region. Over the weekend, German magazine Der Spiegel reported that the Saudi Crown Prince Mohammed bin Salman had ordered that no more government contracts be given to German companies, over irritation with Germany’s perceived support for the Iranian economy.

German corporate giants such as Bayer, Daimler and Siemens are among those who could be affected by a serious decline in trading relations with Saudi Arabia.

Feeling the chill in the desert

Such complications, apparently further exacerbated by critical comments made by former German foreign minister Sigmar Gabriel last year, which did not go down well in Saudi Arabia, have already led to a significant fall in the business being done by German firms in the oil-rich Arab state.

According to Dr Ralph Wiechers, chief economist with Germany’s influential Mechanical Engineering Industry Association (VDMA), there have been “significant declines” in the amount of business done by German firms in Saudi Arabia in 2016 and 2017. Roughly speaking, just over €2 billion ($2.3 billion) worth of German-made machines were sold in the country in 2015, ranging from conveyor belt technology to food and packaging machines, but this was halved to just over a value of €1 billion in 2017.

Read more:US-German conflicts — what you need to know

Business being done by German firms in Iran is also inevitably being affected, according to Treier. “The US wants firms doing business in Iran to stop that business by August 6, otherwise they are going to be under the penalty of US sanctions, if you have also happen to have business in the US. There are many German businesses starting to do business with Iran that also have business in the US, and of course, the US is the bigger market.”

While a fall in trade with Saudi Arabia and Iran has already begun according to Treier, it would not be as damaging to the German economy as the potential fall in business that may result from ongoing issues with Russia, where US sanctions have also been imposed. The Russian parliament is in the process of finalizing a bill of counter sanctions — another unwelcome front of tension for German business leaders to consider.

Meddling with the forces of nature

While reverberations from the ongoing geopolitical tensions have already been felt by German businesses in countries like Saudi Arabia, the overall picture for German exports remains uncertain, with much depending on how the current tensions between the EU and the US play out.

Dr Wiechers says the VDMA remains relatively optimistic that Germany’s machine-building export power can be preserved over the next few years, despite the “political disturbances.”

“We are able to handle the normal ups and downs — that is part of our DNA,” he said. “That is a question of our industry’s flexibility.” But political markets and political disruptions are unpredictable. That leads to the fact that companies and customers will withhold and postpone investments.

“We currently have no forecast for the year 2019, but we expect that we may be able to generate growth although this growth will weaken cyclically on the one hand because we are currently in a boom phase and of course we also see these political risks to world trade.”

For Treier, he believes that if the current tensions with the US are worked out satisfactorily from a German perspective, then 2019 can still be a good year for German exporters. Yet he also says that the latest DIHK survey, which gathers the views of more than 5,000 German business operators across 90 countries, has never recorded such a high level of concern over political interference in the business cycle.

“If we see a restart of a new multilateral partnership between Europe and the US, then we have good prospects for 2019 because the underlying forces in the world economy are not that bad,” he said. “But we could also see a strengthened trade conflict, maybe a trade war, and this will be a condition for a downswing.”

So it seems, it all comes down to those primal forces of nature, and the extent to which they are ultimately going to be meddled with.

EEHC negotiates with Siemens on operation, maintenance of 3 stations