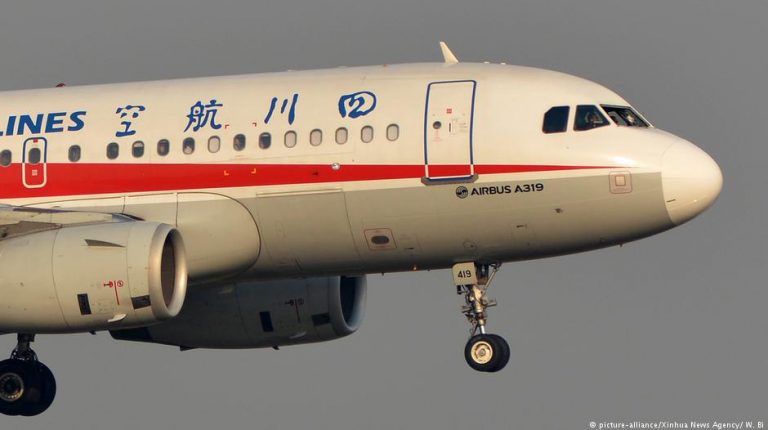 “I saw that the co-pilot was already halfway out of the window,” said the pilot who landed the airplane after a cockpit window shattered in mid-flight. The co-pilot suffered scratches and a sprained wrist.A Chinese pilot was hailed a hero on social media on Tuesday for successfully landing a commercial aircraft after his co-pilot was sucked “halfway” out of the cockpit in mid-flight.

The incident occurred while the Sichuan Airlines Airbus A-319 was flying at 800-900 kilometers per hour (500-560 miles) at cruising altitude on its way from the central province of Chongqing to the city of Lhasa in Tibet.

‘Luckily his seatbelt was tied’

“The windshield burst suddenly and a loud noise was heard, and when I looked to the side, I saw that the co-pilot was already halfway out of the window,” Liu Chuanjian told Chinese newspaper Chengdu Business Daily. “Luckily his seatbelt was tied.”

“Everything in the cockpit was floating in the air,” he added. “Most of the equipment malfunctioned … and I couldn’t hear the radio. The plane was shaking so hard I could not read the gauges.”

Liu was able to make a successful emergency landing in the southwestern city of Chengdu 20 minutes after the accident occurred with all 128 people on board. The injured co-pilot suffered scratches and a sprained wrist.

On Weibo, a social media platform popular in China, more than 160 million people had viewed or participated in discussions about Liu’s performance. The most popular chat forum on the incident ran the title: “My Hero Captain.”

The Civil Aviation Administration of China (CAAC) said it would work with investigators from France’s BEA accident investigation agency and Airbus to examine what caused the window to shatter.

“The windshield has not recorded any failures, nor did it require any maintenance and replacement work” before the incident, CAAC safety director Tang Weibin said.