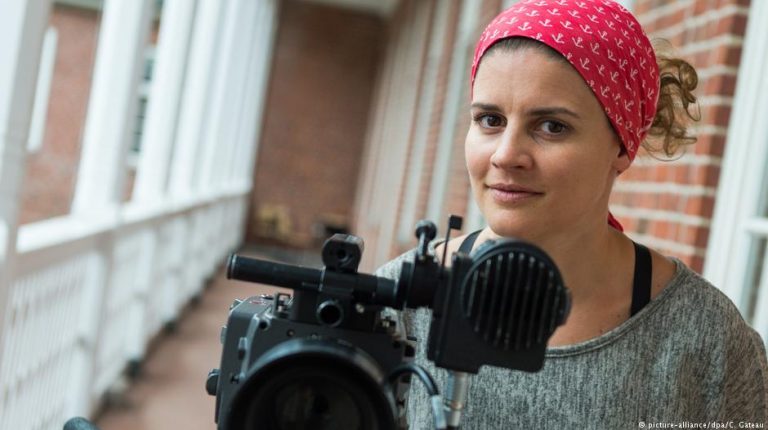 Director Katja Benrath has been nominated for an Oscar for her award-winning short film, “Watu Wote: All of Us.” She spoke to DW about the universal message of her film, the Me Too movement — and Hollywood’s good side.”Watu Wote” (Kiswahili for “we all”) tells the true story of an attack by Islamist al-Shabab militants on a bus in northern Kenya in December 2015. As the attackers tried to separate passengers according to their religion — in an effort to kill only the Christian passengers — the Muslim travelers refused to reveal the identity of the Christians. The film’s key protagonist is Abdiwali Farrah, a teacher who stood up to the militants and later paid with his life.

Katja Benrath’s vital telling of these real events was her final work at the Hamburger Media School. It has gone on to win 60 prizes, including a Student Oscar and an Oscar nomination for best short film. The young filmmaker — the only female director to receive an Academy Award nomination in her category — spoke to DW shortly before she departed for Los Angeles about her decision to make a film about terrorism in Africa, her embrace of the Me Too movement as a female filmmaker and potential recognition on Hollywood’s biggest stage.

DW: Why are you already traveling to Los Angeles, more than a month before the Oscar ceremony?

Katja Benrath: There is a lunch to honor all the nominees. [It] is one of the most magical events, because all the nominees sit around with each other in a relatively relaxed and intimate setting. Maybe I’ll even have the chance to meet people like Meryl Streep and Denzel Washington in person. For me, this is something very special because, despite the justified criticism, I have experienced Hollywood as a place with an incredible amount of creative energy and I find that totally inspiring.

In “Watu Wote,” people of different religions risk their lives for each other. The attack on the bus happened when the refugee debate in Europe had just flared up. What role did that play in your decision to film this theme?

Personally, I was very, very moved by the whole debate about refugees, and I can speak for the whole team: The rigid rejection of people just because they have different origins or religions is massively repugnant to us all. I am strictly against saying that we do not let these people in, because I believe when people are really in need then we have to help each other. I understand that there is much to be discussed, and that there must be regulations — but basically I find it wrong to say that terrorism is now [due to the influx of refugees] coming to our country.

What was more important was that this story had such an incredibly touching and strong message: that in fact it is true that people stand up for one another — even under the most violent conditions, which are very far away from the luxury and security that we have here in Germany. Somehow I was driven with every fiber of my being to tell this story.

The tale you tell is an African story. Before you started shooting, you expressed concern on your website that as a European you could “colonize” history. Were these worries ultimately dispelled?

I had many doubts after the research phase whether I should do the film, about whether it would be pretentious, or whether I was even able to tell a Kenyan story in the Kenyan language. What convinced me in the end were the conversations with the team of local Kenyan authors and filmmakers; and finally, that this story is just incredibly universal. It brings with it a great deal of what I want for humanity: that we regard our counterparts as fundamentally human. And now the film has even won African prizes, which shows indeed that African audiences identify with the film. We have also experienced this very strongly in Kenya.

“Watu Wote” has already won nearly 60 awards, including a Student Oscar. Few female directors have had so much success, an issue that is being newly addressed in the discussion surrounding the Me Too debate. Why do you think that is?

That is very difficult to answer. For example, I have great self-doubt every now and then. Having the self-confidence to sell what I do is therefore very difficult for me. And I’m probably not the only woman who’s having trouble with this. But I also believe that a generation is now growing up in which there is equality.

Have you personally experienced sexism while working?

Sexism is a cross-industry issue and is not limited to the film business. But yes, I have already experienced it generally and also personally. I wish that I could just fire back a sentence in such situations with humor and quick wit. So far, I have not managed that, and I still do not really know how to practice it.

The Me Too and Time’s Up movements seems to be having an effect at this year’s Oscars. Greta Gerwig is the fifth woman to be nominated for best director, while Rachel Morrison is the first female to be in the running for best cinematography. You, too, would be among a small number of female directors to receive the best short film award. Do you think there is a lasting change for women in the film business?

I think so. In Germany, too, one notices that consciousness is changing. And I also think it’s great that stars like Meryl Streep are behind it with strong energy, personalities that many people appreciate and listen to.

At the Grammys and Golden Globes, women have sent a signal of solidarity by wearing all black and white roses. If something similar is planned for the Oscars, will you take part?

Definitely. I always like to swim against the tide, but for the right thing, I think we should all be a force together.