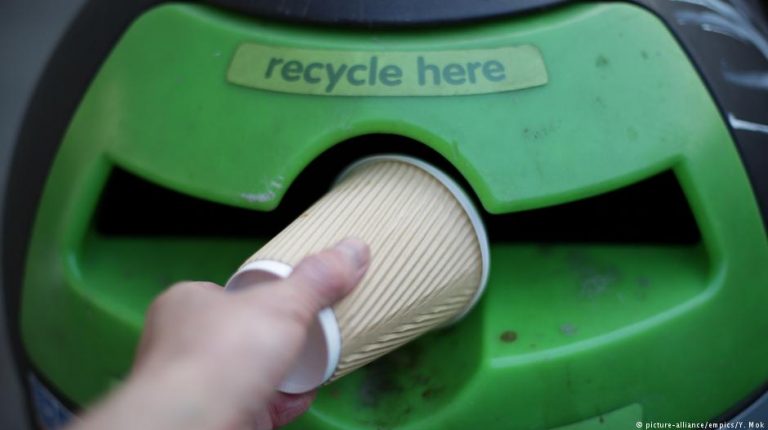 Recycling, ditching meat and switching to a bicycle — changes we should be making to protect the environment. And yet, it all seems so difficult. What’s holding us back? And how can we make significant changes?Plastic has become one of the environment’s biggest adversaries. In little more than half a century, we have produced 9 billion tons of it globally. And though we have a growing awareness of how it is choking our streets and rivers, smothering and strangling marine life, and even ending up in our food, it is more ubiquitous than ever.

Then there’s carbon dioxide. It’s polluting our air, warming the planet, causing sea levels to rise, and extreme weather like droughts, flooding and destructive mega-storms. Yet for all that, we continue to drive gas-guzzling vehicles, fly at when we want to, heat, cook and manufacture using fossil fuels.

Read more: River of plastic trash is flooding our oceans

If breaking with old habits could stop all the above, the big question is why don’t we? Conservationists and climate change activists are working with behavioral scientists to try and come up with an answer.

Elke Weber, professor in energy and the environment at Princeton University, says one reason could be a human aversion to loss. That theory suggests we are more heavily affected when we lose or have to part with something than when we gain something.

In environmental terms, that means the positive impacts of changing the way we live in order to benefit the planet are not as motivating as the perceived sense of loss that would go hand-in-hand with certain eco-friendly actions, such as no longer using cars.

“Research shows that we hate losing something around twice as much as we look forward to getting it in the first place,” Weber told DW, adding that people hold back because there is no visible immediate effect from their positive action, and that the greater benefit will be felt by subsequent generations.

“It’s abstract — whereas the costs upfront are very real,” she added.

In the past, conservation and environmental organizations have focused on rational arguments to try and convince people to make positive changes. But since success with this strategy has been limited, some groups are now trying a different approach.

Among them is United States-based conservation organization Rare, which recently launched a Center for Behavior and the Environment aimed at developing and sharing insights from behavioral science as a means of tackling environmental problems.

“We are a highly emotional species, so emotions are often more powerful than reason in terms of their influence on our decision-making,” Kevin Green, who is the senior director at the Rare center, told DW. “But we are also highly influenced by the context or the environment of our decision-making.”

Rare, which engages directly with communities to encourage positive social change, aims to inspire feelings of community cohesion, and uses targeted local campaigns to promote a sense of pride.

Working with local fishermen in countries like the Philippines, Brazil and Mozambique, the organization has helped set up cooperatives designed to prevent the collapse of small-scale fisheries.

“There is a finite but renewable source in the water that individuals are harvesting at rates that exceed its ability to renew,” Green explained. In contrast with fishermen going out and fishing alone in “a race to catch the last fish,” the cooperatives provide a form of positive pressure.

They set rules for themselves, such as quotas and no-fish zones which give stocks a chance to replenish. Similar efforts to impose restrictions had been ineffective because there was “no reputational risk” to individual fishermen who violated them, Green explained.

“But if we can make my good behavior more observable, we can promote my identity as a good fisher in the community. And I’m obviously more likely to abide by that,” he said.

Taking on the system

Changing individual behavior is also being seen as an important part of the fight against climate change. In recent years, campaigns have focused on trying to get people to recycle and reduce their personal carbon footprint.

But some critics say individual change has little impact and that it is up to policy-makers to introduce more rigorous regulations, and businesses to be more proactive.

Read more: You won’t stop climate change on your own — demand action!

Some governments have taken tentative steps. The UK, for example, introduced a fee for plastic bags in large stores — a move that has led to a 90 percent drop in their usage — while the European Union recently unveiled a new strategy to deal with plastic waste. Norway and China are just two of a number of countries that have announced plans to ban petrol-powered cars in the future.

“It gains media attention and really creates a sense that our leadership is concerned about this, and talking about it as a priority we need to pay attention to.”

But some environmentalists question whether that goes far enough. Karen O’Brien, a professor of human geography at the University of Oslo, argues that it is also our responsibility to drive governments to take further action that will lead to significant impacts.

“It’s not just your capacity to sort trash or ride a bicycle, but your capacity to actually get bicycle lanes made, the recycling systems in place,” O’Brien told DW. “It has to come as much from the bottom up as from the top down, and you have to influence that.”

By becoming politically active, she says, people have more of an impact than they might think — not only on politicians, but also on their own communities and beyond.

“Ten percent of the population holding a strong belief is enough to tip the system toward other beliefs,” she said, adding that this shift is not happening quickly enough.

Elke Weber believes that key to encouraging and speeding up behavioral shifts is getting people to be more positive about our battle with climate change, to show people that it is not an insurmountable problem.

“Most of the time you get these disaster stories,” she said. “But we also need positive role models about what a better future could look like and how we get there.”

FM follows with concern detention of Egyptian fishermen in Sudan