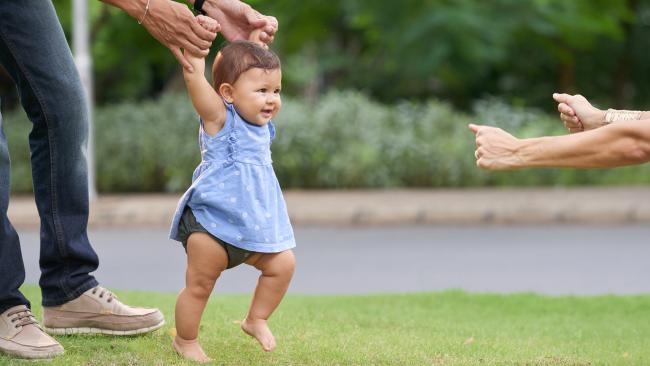 Ten-week-old babies can learn from trying to walk months before they begin actually begin walking, say researchers at Lancaster University in the United Kingdom (UK). They gave the infants experience in reflex walking, a primitive instinct in babies which disappears around 12 weeks of age.

When held by an adult at a slightly forward angle, and with the soles of their feet touching a flat surface, the infants will reflexively walk by placing one foot in front of the other. Psychologists at Lancaster University gave this reflex walking experience to one half of a group of 10-week-old infants, who took an average of 23 steps in 3 minutes. The other half of the group did not share the experience of walking, read a statement from the university.

Researchers played a film showing human figures walking and crawling to both groups of infants as they sat in their mothers’ laps in a dimly lit room. They then measured how the infants responded to this visual information by recording electrical activity in their brains.

Only the brains of the infants who had experienced “reflex walking” were able to recognise the same movement in the film of figures walking. Their response was more similar to that of older children learning to walk rather than babies at younger ages. The group of infants who had not practised “reflex walking” did not show this more mature brain activity but they may have recognised the filmed crawling movement.

Psychologist Professor Vincent Reid said the research, published in the journal Neuropsychologia, showed a link between perceiving an action and carrying out that action even in early infancy. He added that this result strongly suggests that experience refines the perception of biological motion during early infancy.

Reid added that the act of walking has therefore shifted the percept of biological motion for those infants who had experienced self-produced stepping behaviour, and from his point of view, this suggests that the limited, momentary period of experience altered the infant’s perception of walking, indicating a link between action perception and action production in early infancy.

Traveling down Picasso’s path to Guernica