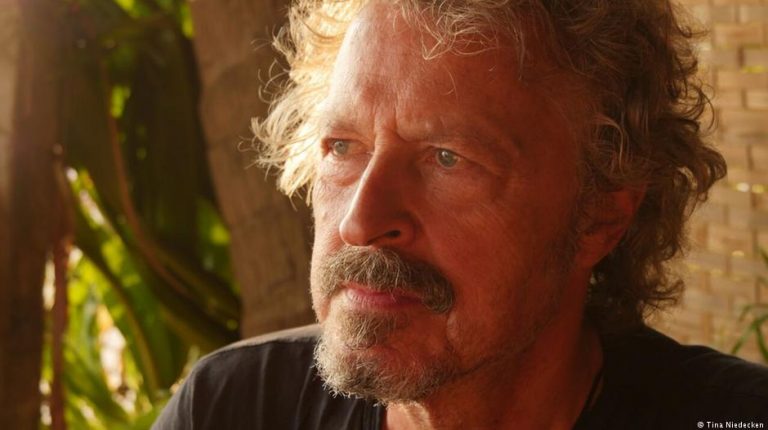 Honored by the Beethoven Academy, the rock musician has emerged as one of Germany’s most prominent humanitarians. DW spoke with Niedecken on his work with former child soldiers and his push for integration in Germany.On December 19, the 3rd International Beethoven Prize will be awarded in Bonn’s National Art Museum to the composer and singer Wolfgang Niedecken. The prize goes with a cash award of €10,000 ($11,800). Following past prizewinners — the Syrian pianist Aeham Ahmad and the Turkish pianist and composer Fazil Say — Niedecken is the first German to be thus honored. As front man for BAP, Niedecken is the only member remaining of the original rock group founded in 1976. With its songs in Cologne dialect, the formation has long been a fixture in the German rock scene far beyond the city.

In his song texts, Niedecken often takes a stand on socially relevant issues. His initiative 25 years ago, “Arsch huh, Zäng ussenander” (Stand up, open your mouth), protested hostility to foreigners. In cooperation with the non-profit organization “World Vision,” Niedecken and outdoor sports equipment manufacturer Jack Wolfskin established “Rebound.” Based in Africa, the project seeks to reintegrate former child soldiers and war-traumatized children into society through the means of professional training and psychological and social support.

Deutsche Welle: Mr. Niedecken, you are being awarded this year’s Beethoven Prize “on behalf of human rights, peace, liberty, combating poverty and inclusion.” The prize was inspired by words of Ludwig van Beethoven that perhaps were a principle of his life: “Do well when one can, love freedom above all else.” What does the prize mean to you?

Wolfgang Niedecken: It’s an honor. And about all those things you just mentioned, I try to live up to them with my songs and lyrics. One is happy if it’s noticed at all. All the more so if it’s recognized.

Do you have a connection to the music of Ludwig van Beethoven?

As an amateur, sure. I’ve visited the Beethoven House [in Bonn] and have gone to concerts. I can competently talk about Bob Dylan, the Rolling Stones and the Beatles, but I’ve never dared to try to talk competently about Ludwig van Beethoven.

That probably wasn’t a prerequisite for the award. Have you thought about what to do with the prize money?

I’ll put it into “Rebound.” With the name coming from basketball, the project is about getting a second chance, particularly when it comes to reintegrating former children soldiers into society. We began in Uganda during that country’s civil war. In the past several years, we’ve been working in eastern Congo. Abducted children have to do horrible things there, and they suffer terribly. In courses lasting nine months, they learn reading, writing and arithmetic — plus a skill with which they can try to stand on their own feet. Most have been rejected by their families. They have to re-enter society somehow.

Have you met any of these children personally?

Yes, I try to go there as often as I can. It’s impossible right now. Before the elections, the region is so dangerous that no one can safely go there. The people who work for us are even putting their lives at risk. I can’t find an airline that would take me there. If you fly to eastern Congo, you can make it as far as Goma. But going on to Beni or Butembo, where we have our facilities, is possible only on an occasional UN plane. The smaller airlines are unsafe. But I’ll go back as soon I can.

Your project began in Uganda, and today that country is almost a model for the humane treatment of refugees.

I traveled to northern Uganda two or three months ago with Germany’s foreign minister. There’s been a massive influx of refugees from southern Sudan in the region. It might sound cynical, but I think the experiences the people had there with their own civil war have had a wonderful effect, making them receptive to the plight of people who are currently fleeing warfare. Conditions in southern Sudan are unimaginable, and huge numbers of people are fleeing. We visited a refugee camp near the south Sudanese border. It was something of a model camp: not perfect, but hats off, they did a respectable job.

Twenty-five years ago, a hundred thousand people came to the event “Arsch huh, Zäng ussenander” in Cologne. That means “Stand up, open your mouth” and is the title of a song you wrote protesting racism. Now, a quarter of a century later, hostility towards foreigners seems to be increasing in Germany and other countries. Are developments in society regressive as a whole?

A lot has happened in these 25 years: the media report more on the issue; the entire political landscape has changed. Back then, it was individual citizens standing up for refugees from the civil war in Yugoslavia. It seemed like every day, a home for political asylum seekers somewhere in Germany was going up in flames. It was shameful, frightful, and numbing. People were starting to get used to it.

Now, of course, populists have taken control in some countries. This is a very, very dangerous development. One has to stand up to them, and that’s only possible as a joint effort. The only thing I can concretely achieve with my songs and texts is to insure that people don’t completely lose their empathy. If everyone thinks only about himself, that’s the end of our civilization.

Did the initiative have an effect back then?

Yes it did, and it still does in Cologne. The initiative “Arsch huh” has become something like an organization. People listen to it. One shouldn’t overdo it though. If you hit people with the subject every day, they’ll stop listening sooner or later. And you have to take a stand somewhere above party politics. But wherever it makes sense, we’re still active.

Sometimes you take a stand in your songs, be it in opposition to poverty, atomic weapons or right-wing ideology. Now, some people take the philosophical position that music is complete in and of itself and is there to be heard, perhaps to entertain. Others say that music should be put in the service of a greater goal. What is your point of view?

Actually, music is the language of God — and abusing art is a terrible crime. If you make bad art to carry a message, you’ve done a disservice to it.

What about making good music to carry a message?

I wouldn’t make music to communicate a party platform or labor union decisions. Something will go through my head, I’ll get obsessed with it, and at some point will realize: “Ah, it’s trying to become a song!” Only then do I start writing. I never write on commission.

Authenticity is the key. You can really sing about everything, any subject will do. But it has to be good — and not forced. If I look at the kind of songs written for the Socialist movement, for example: awful stuff! A total exploitation of art.

Music always has to do with feelings. Maybe we can keep people’s feelings alive so that they remain sensitive and don’t look the other way.

So then, tolerance ideally comes as a natural impulse, from inside. What about your audiences? Are these like-minded people, or are there maybe a few right-wingers in there?

I don’t think many of them would find their way to our concerts. They’d hear so many things they don’t want to hear that they’d probably rather just stay home.

What about the information bubbles we find ourselves in today? Don’t music and its contents just reinforce the convictions we already have? Or have you had the experience that through your art, you were able to persuade someone to change their stance?

Wouldn’t that be wonderful, if somebody were to say: “Wonderful songs, Mr. Niedecken, we changed our minds!” That’s not how it works though.

I talk with lots of people but don’t try to proselytize. Whoever wants to see or hear my stuff should listen to it and then draw his own conclusions. That’s the nice thing about it. You have to let people think for themselves.

Have you encountered hostility over things you’ve sung?

Yes, of course, that’s part of the game. It’s a rough world and not without disagreement.

BAP was one of the early groups that sung in the Cologne dialect without sounding like folk music. Has the band been a role model for others, in other parts of Germany?

Sure. But we never sought success. BAP grew out of a hobby band, and at one point, the crowds started getting bigger. But nobody would have guessed that it would still be going on four decades later.

I sing in the Cologne dialect because I consider it my native tongue. There were British bands back in the Sixties who sang in their local dialects, and I considered it a form of authenticity. And of course, street talk, if you want to call it that, is much better suited to rock’n’roll.

Back to the Beethoven Prize: what will you do at the awards ceremony?

I’m looking forward to the performances. I can’t perform myself, unfortunately, because I’m arriving in Bonn at the last minute. On both days before, I will be playing at a soiree hosted by the German president at his Berlin residence honoring the late German author Heinrich Böll. And on the day of the event, I have to do some voice-overs for a TV documentary about Bob Dylan. So I hope the plane won’t be late.

Maybe you can be content this time to do nothing at all and just take it all in.

Maybe I’ll read a text, but in standard German, not dialect. That’s my compromise proposal.

When sports challenge belonging to a homeland