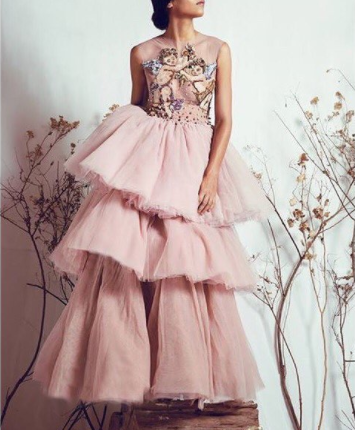 With exaggerated sleeves that mimic the wings of fallen angels and moves with the wind like an extended sail, the designer’s interpretation of raged angels starts to manifest in the heart of his retro inspired atelier.

As the floral wallpaper covers the surrounding walls, the mannequins baring the previous collection stand still to watch the evolution of anger as the furious shades of red make a first-time entrance into a room, where pastel has always ruled.

Mohanad Kojak, is set to make his debut appearance at Dubai’s fashion forward 10th season later this month. The Egyptian designer will be showcasing his new collection “Rage of the Angels” through a runway show during the three-day event.

The spring/summer 2018 collection aims to address the inhuman crimes against certain groups, authenticities, religions, or races. Through the use of red as a statement of bravery and pain, the designer narrates the suffering of any minority that falls under the blades of genocide.

On the other hand, Kojak has maintained his much-celebrated signatures to indicate how little hatred should change those on the right side of the debate; as he explains that despite everything, those survivors will always have their own worlds; yet, painted in a different colour.

Kojak is quite known regionally with his Victorian accent and retro aesthetic accentuated with bold silhouettes as well as oversized collars and sleeves. Meanwhile, his pastel colour pallet and picturesque embroidery has made him the year’s most prominent celebrity favourite.

Despite his local and regional success, the designer has never showcased any of his previous collections through a runway show, proving that social media is a designer’s newest best friend. Therefore, this would only make his upcoming show in the city of skyscrapers a significant milestone for his brand as well as the local fashion industry; given the fact that no local designer has beaten him to it.

Dubai Fashion Forward is the region’s most-awaited bi-annual fashion event; which takes place every April and October. For the 10th season, the organizers have already promised more extravagance as they aim to host the regional debut of several renowned international designers; on the other hand, they are also set to bring back many talents that took off from this particular platform.

Parallel: a meeting point between soft and masculine

Huwa taking the region by “Sandstorm”

“Voice of Anonymous Women”: a fashion statement against sexism