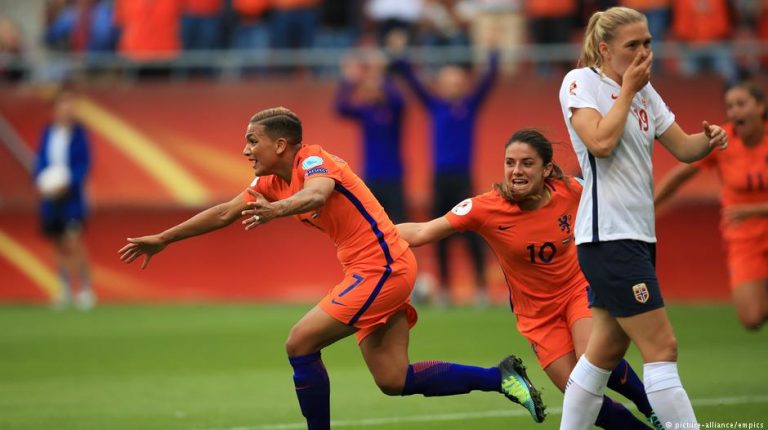 For much of the Euros opener, it seemed the Netherlands might start their own shindig with a whimper. But DW’S Matt Pearson was in Utrecht to see the moment the fashionably-late hosts sparked the tournament in to life.For the most part, the Dutch arrived early. The Utrecht fan park was a swaying sea of orange three hours before the Netherlands and Norway kicked off on Sunday evening. Their team took a little longer to mark their arrival, but when they finally breached Ingrid Hjelmseth’s goal it was impossible to escape the feeling that this tournament had truly begun – and it was in the right country.

Hours later, as the light started to fade and the exuberance of the hundreds gazing at screens in the city’s Neude square was heading the same way, Shanice van de Sanden (top, left) stooped to head past Hjelmseth and break the swelling dam of tension.

As it had been throughout, the roar coming from in front of those screens as the Liverpool forward celebrated was an extension of the 21,732 crowd 3 kilometers down the road at The Galgenwaard Stadium.

“I was thinking ‘Why aren’t they taking their chances?” Dutch fan Marjon ter Hemsel said of the moments before the decisive strike, as happy fans in orange filtered away from the fan zone. “We had a lot so I was a little worried because that’s also a problem for the men’s team – they have a lot of chances but don’t score.

“I thought ‘Oh no, I hope it’s not going to be like that’ but happily we made it in the end. When we scored we were yelling and jumping around, there was beer in the air, I became a little bit wet but it was worth it.”

She wasn’t alone in feeling relief. As the Netherlands probed early, the crowd moved almost as one, there were collective bends of the knees, arcs of the back and long exhalations of breath. Daniele van de Donk and Jackie Groenen went through on goal early but both were foiled and anticipatory hands in the air turned to frustrated hands on heads.

Norway had their chances too in the first half but the Dutch needed this. They came out for the second half with a renewed will, working the ball rapidly and incisively through the Norwegian midfield time and time again, only to flounder on the rock of Hjelmseth.

“The atmosphere was great,” said fellow Dutch fan Ludrid Overhand. “But what I really enjoyed was the way the ladies from Holland played, they exceeded my expectations.”

But for her, and many others in the central Dutch city, this was about more than three group stage points: “This is not only important for the Netherlands but it’s important for women’s football. It is under-estimated and they are compared too much with men’s football. But it is a different environment, different style, different atmosphere so I don’t think it should be compared, you have to see it apart.

As the minutes ticked away, the bars grew busier and the nervousness in the city square became ever-more palpable. Parents re-assured children it would turn out ok, friends looked to each other for reassurance. But not everyone was suffering.

“I wasn’t worried at 0-0 because I have followed [the tournament] really well and I have informed myself about all the teams,” said Ludrid. “I knew the Dutch girls would win it. They are stronger than Norway and stronger than Denmark and Germany, these teams are not as strong anymore. I think the Netherlands are going to win the whole tournament.”

With their performance in the second half and their support on the streets and in the stands, the Dutch don’t look ready to leave their own party for quite some time – despite their team’s slightly tardy arrival.