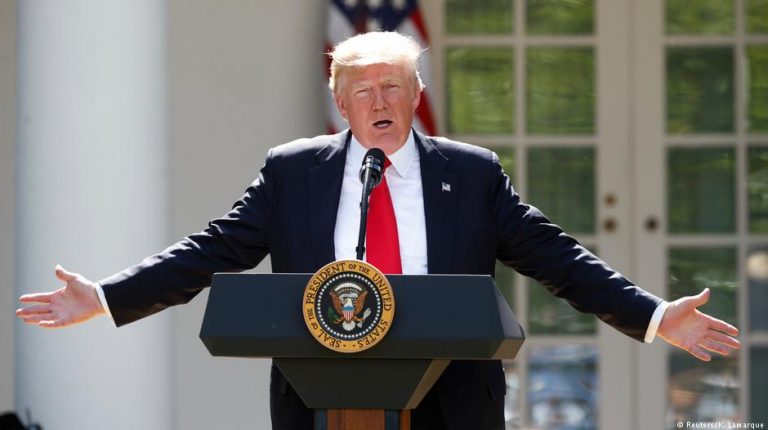 The steady drip of revelations about the multiple inquiries into the Trump campaign’s possible ties with Russia weaken the US and dominate world headlines. But that does not mean Washington is unable to act.Last Thursday, the same day the world was breathlessly observing former FBI director James Comey’s Congressional testimony, the House of Representatives voted to kill the most significant law to regulate Wall Street after the financial crisis, the 2008 Dodd-Frank act.

While the measure faces an uncertain future in the Senate, it is a bold move with potentially far-reaching consequences for financial institutions and citizens not just in the US, but around the world. However, the vote to gut Dodd-Frank was largely drowned out by the public and the media’s incessant preoccupation with the minutiae of the Comey-Trump-Russia-affair.

Also on Thursday, the US military shot down a pro-Syrian regime drone in southern Syria that was firing toward US-led coalition forces in the country, according to a US military spokesman. It was the first known time, he added, that pro-Syrian forces had fired at coalition troops in the area and marked a major escalation of tensions between the US and troops supporting the Assad regime.

It was also the third time US forces had struck pro-Assad regime forces in recent weeks. But like the Dodd-Frank repeal vote in the House, the uptick in hostilities and its potentially significant consequences was largely overshadowed by the Comey-Trump-Russia-affair.

“If anything, we are distracted by this theater and some of these decisions are taken that would normally require a robust debate,” said Sarah Kreps, an international security scholar at Cornell University. “We are not paying attention to the substantive policy actions that are being taken.”

Both instances, the Dodd-Frank repeal vote and the ramped up US military involvement in Syria, also show that Washington is clearly capable to act decisively domestically and internationally even while it is in constant crisis-containment mode.

“The bureaucracy keeps doing its own thing,” said David Sylvan, professor of international relations at the Graduate Institute Geneva. The real problem, he added, is that the bureaucracy can randomly be overwritten by Trump and that the president has still only filled a fraction of the people needed to effectively run the various cabinet agencies.

That his administration is still capable to act even though it has been hobbled by the Comey-Russia-affair, constant internal turmoil, and the president’s erratic behavior, is not to say that all of it has not had consequences for Trump and the United States’ global standing.

“It casts a shadow on almost everything he does,” said Kreps. “There is a cloud now over the Trump presidency and it diminishes the political capital he has abroad.” Her colleague David Sylvan put it more bluntly.

“It weakens the United States,” he said. “I don’t think there is any leader in the world who trusts Trump now. They think he is lazy and incompetent and quite possibly corrupt. And they will try, in so far as they can, to bypass him. If they can’t bypass him, they will try to cut down on their interactions with the United States.”

Still, it would be misguided to spend too much time focusing on the perceived presidential ineptitudes and the details of the multiple investigations into the Trump campaign with the expectation that they could somehow cripple or even cut short the president’s tenure.

“I think these things can happen in parallel,” said Kreps.

An administration can still function and make politically significant decisions while under investigation, said Kreps, referencing presidents Richard Nixon and Bill Clinton who – unlike President Trump – had impeachment proceedings opened against them.

“Be aware that this doesn’t necessarily consume a presidency,” said Kreps. “All these investigations erode the reservoir of legitimacy, but as long as Trump has a majority in Congress, this is likely to be a sideshow.”

By focusing on the tantalizing, but often inconsequential political slugfests that the president appears to enjoy engaging in, the public and the media are in danger of overlooking some of the more mundane seeming, but potentially more consequential decisions made by the White House.

President Trump’s move, for instance, to give military leaders on the ground greater leeway in deciding how to fight the so-called Islamic State than they had under President Barack Obama and the consequences this may have has arguably garnered less international attention than the Comey-Trump-Russia-affair, even though it has potentially more immediate global repercussions.

That’s why it is important to recognize that Trump’s unorthodox behavior and governing style, coupled with the constant drip of new revelations about the investigations into his campaign’s ties to Russia, have the effect, whether intended or unintended, to distract, said Cornell University scholar Kreps.

And as a consequence, some of the things the Trump administration is doing, added Kreps, might be harder to do “if people were actually paying attention. It is a call to not assume this will take over the administration.”

“War of Shadow: The Dark Throne”: an opening gate to the beginning of creation