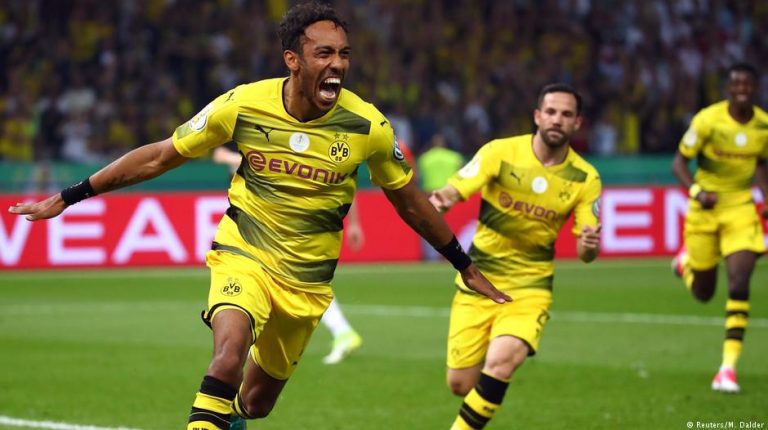 Borussia Dortmund won the 2017 German Cup at the fourth time of asking, beating Eintracht Frankfurt 2-1 in the Olympic Stadium in Berlin. French starlet Ousmane Dembele gave the Black and Yellows an early lead before Ante Rebic scored a deserved equalizer for Frankfurt.

Despite both teams hitting the woodwork, Bundesliga top scorer Pierre-Emerick Aubameyang scored the winner from the penalty spot after goalkeeper Lukas Hradecky brought down Christian Pulisic in the box midway through the second half.

With Julian Weigl injured after breaking his ankle in the penultimate Bundesliga game of the season, coach Thomas Tuchel opted for Matthias Ginter in defensive midfield instead of Nuri Sahin, justifying his decision by saying he expected long balls from a physical Frankfurt side.

Making their first appearance in the cup final since 2006, Eintracht coach Niko Kovac handed Slobodan Medojevic his debut in place of Guillermo Varela, after the Argentinian loanee from Manchester United was internally suspended for having a tattoo. Up front, Rebic and Haris Seferovic lead the line.

Reus and Dembele impress early on

Seemingly determined to finally win a major senior honor, it was Marco Reus who provided the early sparks for Dortmund, twice penetrating behind the Frankfurt defense on the left-hand-side as smoke from the yellow end of the Olympic Stadium billowed across the field.

But the opening goal came from the opposite flank. Reus found Lukasz Piszczek with a sweeping cross-field pass out to the right and the Pole quickly forwarded the ball in to Dembele. The French teenager turned Jesus Vallejo inside-out in the box before firing high into the roof of the net.

A dream start for Dortmund but a nightmare for a Frankfurt side who have struggled to score goals in the second half of the season. Still, Kovac’s side seemed inspired by their second-half comeback against RB Leipzig on the final day of the season and poured forward; Shinji Kagawa only just stopped Haris Seferovic with a last-ditch challenge before Timothy Chandler headed wide from an Ante Rebic cross.

Backed by over 20,000 raucous Frankfurters in matching t-shirts, the Eagles were hunting with real menace and they got their reward on the half-hour mark. Mexican playmaker Marco Fabian won the ball inside the Dortmund half before Mijat Gacinovic split open the defense with a through ball to Rebic. One-on-one with Bürki, the Croatian made no mistake and the cup final was all-square.

Ten minutes later, Frankfurt almost took the lead. Again winning possession high up the pitch, Rebic and Seferovic combined with a crisp one-two but the latter’s shot came back off the post.

A doubt before kick-off, Marcel Schmelzer had given an encouraging thumbs-up after the warm-up but the Dortmund captain only lasted 45 minutes before being replaced by Gonzalo Castro at half-time. The luckless Reus had also received treatment in the first half and was ultimately forced to make way for Christian Pulisic at the break.

Aubameyang on the spot

It would be unfair to suggest that Frankfurt’s marginal first-half superiority was due to the presence of two unfit Dortmund players, but the half-time changes had an effect as the Black and Yellows made a positive start to the second half. Just after the hour mark, the ever-dangerous Dembele cut back to Aubameyang but the Gabonese’s acrobatic effort was cleared off the line by Fabian – with a helping hand from the crossbar.

Minutes later, Tuchel’s substitution took effect. Raphael Guerreiro lofted a ball into the path of Pulisic and the American was brought down clumsily by Hradecky. Aubameyang made no mistake from the spot, chipping home cheekily to give Dortmund the lead.

With five minutes remaining, Aubameyang could have wrapped up the win, staying on his feet and turning inside past David Abraham but his shot clipped the outside of the post. Unfortunately for a valiant Frankfurt side, it wasn’t a miss Aubameyang would come to regret as Dortmund ended a run of three straight cup final defeats.

Excluding the German Super Cup, Dortmund had not won any silverware since the 2012 German Cup.