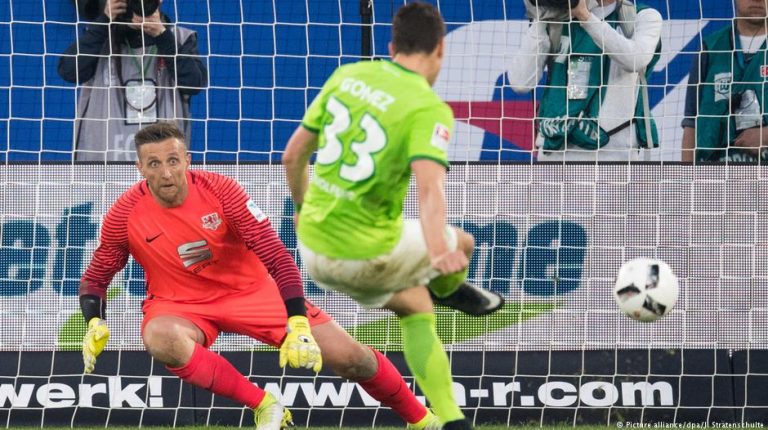 Wolfsburg by no means assured their Bundesliga survival on home turf in Thursday’s first leg, but did at least secure an advantage against underdogs Eintracht Braunschweig. Coach Andries Jonker had joked before the game that 6-0 would do just fine, a reference to Braunschweig’s poor recent form, but his players could only deliver the one.

And that goal was rather contentious. Wolfsburg won the penalty on the back of a handball call against Gustav Valvik. Nobody could dispute that Yunus Malli’s goal-bound shot struck Valvik’s left hand. However, it wasn’t clear that he could do anything to prevent this, nor was it clear he was actually inside the penalty area at the time. And to pour salt in Bruanschweig’s wounds, replays suggested Mario Gomez had committed a handball of his own earlier in the build-up to the decisive call.

What was much less contentious was Gomez’s finish from the penalty spot. He calmly slotted it in the bottom corner, sending keeper Jasmin Fejzic the wrong way.

Prior to this 35th-minute goal, the second division underdogs had missed the best chance of the match. Mirko Boland missed a free header from close range mid-way through the first period with Koen Casteel’s goal beckoning.

Early in the second half, Wolfsburg enjoyed probably their strongest period of play in the entire game. Creative players like Daniel Didavi, Malli and Vieirinha were proving a handful for the Braunschweig defense. Only a couple of strong saves from Fejzic, denying Gomez and Didavi among others, kept the Wolves’ lead in check.

Braunschweig struggled to create serious chances to equalize in the second half. When key impact subsitute Domi Kumbela had to hobble off the pitch again just minutes after coming on, an important attacking option was removed from coach Torsten Lieberknecht’s second-half plans.

However, Braunschweig’s Lions have kept the game very much in reach ahead of Tuesday’s second leg in front of their home fans.

Germany’s relegation playoff system pits the third place team in the second division (Braunschweig) against the third-to-last team in the Bundesliga (Wolfsburg). Historically, the top division team has survived in 13 of the 18 such encounters.

You can read our rolling coverage below.