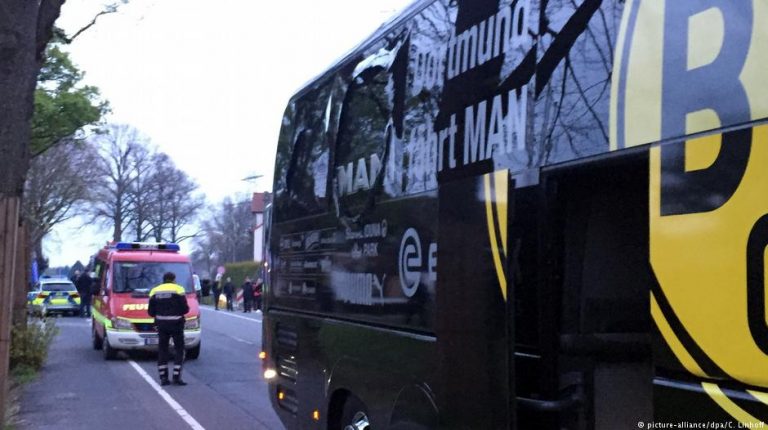 Borussia Dortmund’s Japanese midfielder Shinji Kagawa has revealed some of his thoughts on the night BVB’s team bus was attacked, and how they continue to affect him. Dortmund will contest Saturday’s German Cup final.Shinji Kagawa’s blog post to mark the end of the Bundesliga season returned to the night of April 11, when an attacker targeted Dortmund’s team bus.

“I was scared. I’m still scared to be honest. I’m scared to get on the bus, scared to go to games. I was scared on the bus from the hotel to the stadium in Monaco [for the second leg a week later],” Kagawa said. “I used to think things like war and terrorism were distant things to me. But after this happened, I feel it’s not something that happens to other people, the danger is always present.”

The bomb attack injured BVB defender Marc Bartra and caused the first leg of the Champions League quarterfinal against Monaco to be delayed. Kagawa recalled in his Japanese-language post that he was seated in roughly his usual position, around the middle of the bus, at the time. He was listening to music.

“Everyone is on board, the bus rolls out as usual. About 100 meters maybe. There was a big bang. I was startled. What had happened? I didn’t really know,” Kagawa recalled. He wrote that some teammates called forward, yelling “drive” or “get us out of here,” but that he himself was rendered speechless and motionless with fear.

“Another 100 meters, then we stopped. I looked behind and saw the windows shattered. I saw Marc [Bartra] hunched over. I was – all of us were aghast.”

‘I could not imagine playing a game’

Kagawa also notes the decision to replay the game within just 24 hours of the attack, strongly hinting that the team struggled to deal with the incident in time for the re-run.

“We heard the match would take place the following day, but in my mind I could not imagine playing a game. I think none of us could. I got home to calls from concerned people, but none of it was sinking in. I got in bed but could not sleep though I tried. Finally, I dozed off for a short moment and saw a dream. A dream of that scene, that big bang, shattering windows on the bus,” Kagawa wrote.

The swift replay – accommodating two teams with hectic fixture schedules at a key juncture in the season – had also revealed some tension within BVB, specifically between coach Thomas Tuchel and chairman Hans-Joachim Watzke. Tuchel later suggested that Watzke, along with representatives for Monaco and UEFA, decided to replay the game within a day without properly discussing the issue with him and the team.

Spanish defender Marc Bartra, who suffered severe lacerations to his arm and a broken wrist, was back in action for Dortmund’s last Bundesliga game at the weekend. “It was so great to be able to play with Marc yesterday,” Kagawa said. “I am overjoyed that he was able to make his return to the pitch.”

Broadly reported in German media, Kagawa’s comments were also posted as an English translation by a Dortmund enthusiast on Reddit.

Kagawa and Dortmund have one match left this season – their chance to salvage some silverware in the German Cup final against Eintracht Frankfurt on Saturday, May 27.

The match forms part of a cocktail of security concerns for Berlin police later this week, coinciding with former US President Barack Obama’s visit to Berlin and with a major ceremony as part of a five-day conference for Germany’s protestant churches. Obama will appear alongside Merkel at the Brandenburg Gate on Thursday, while the “Kirchentag” runs from Wednesday through Sunday.

A spokesman for Berlin police, Thomas Neuendorf, described the challenges as a “mammoth task” in an interview with German sports news agency SID, adding that Monday’s concert hall bombing in Manchester would also put people and officers on edge.

“An attack like that always leads you to ask questions about your own security concepts,” Neuendorf said, warning of a high but “abstract” level of threat.

Traveling fans could also pose a problem, not least considering the rioting and 96 arrests in the Moabit district after Frankfurt’s Bundesliga visit to Berlin in February. Berlin police have forbidden the two groups of fans from gathering together in a bid to limit the risk of clashes, and say they will also be on the lookout for Hertha Berlin faithful seeking retaliation.

What’s more, Dortmund fans’ preferred venue for festivities before the German Cup final, the Alexanderplatz, has become synonymous with security since Anis Amri’s December 19 attack on a Christmas market at the scene.

Löw warns of player burnout due to growing international tournaments

Opinion: It’s time for Tuchel and Watzke to bury the hachet