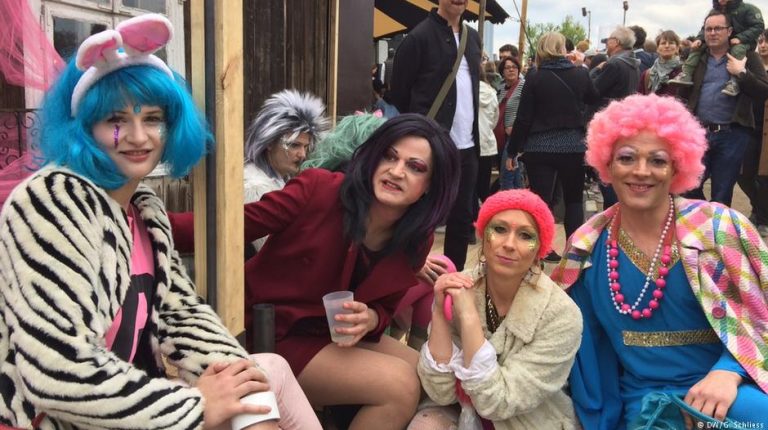 The Holzmarkt in Berlin was once the home of a legendary club: Bar 25. Now, the former owners opened a chic village in the same spot. But instead of a hippy utopia, it’s all about business, says columnist Gero Schliess.It started with a board and a nail. Then came another board and nail. Finally, Bar 25 was ready. “It was a small wooden hut with slightly quiet music,” recalls a woman who was there at the time. Soon, the eclectic hut was a legendary house club and the epitome of Berlin’s bohemian culture. As if built from a dream, it seemed to stand for a freer life, one without concerns for building inspection officers or fire safety measures.

Bar 25 was different than Berghain

Bar 25 was a legendary stage for “recurring mud baths and five-day parties,” writes the newspaper “TAZ.” It was a place for Berlin’s wild party people to do whatever they pleased. And by party people, I don’t mean the kind who today fly into the city and disappear immediately into the dark abyss of the Berghain.

Back in 2004, these were Berlin’s original creative crowd – the old school revolutionaries and an alternative types. They dreamed of a life separate from commerce, speculation and the state.

Where the nailed-together dream of hope once withstood the thump of the bass, today it is concrete capitalism. Yes, today the Holzmarkt stands directly in the same place on the river Spree. Brightly painted plaster houses are lined up in a row, gleaming and neatly arranged like a string of pearls. They were built by the same people who once loved the ramshackle buildings of wood and nails.

Creative village at the Holzmarkt

What a coup! First the future building owners won the popular vote for a “Spree property for everyone.” They then were able to make it happen after winning a bidding competition. A Swiss investment firm, Abendrot, provided the capital to purchase the site for their “Society for Urban Creativity.”

And here’s the kicker: on the rotten foundation of Bar 25, they’ve put up an entire village, complete with a bakery, kindergarten, artist workshop, theater, hotel, the club’s successor, Kater Blau, and a restaurant called “Katerschmaus” that charges 30 euro a dish. Is this a leisure park for high-earners, or what? I ask myself where that original dream has gone today? Have they sold it – and sold themselves?

Thousands of Berliners came to the opening of the “new” Holzmarkt. For most, it was like a carnival with drinks, a dance floor and donuts, as well as childcare. It seemed that few had any idea they stood on the holy ground of historic Berlin hippy-dom. Only a precious few knew that the place had come a long way from the original wooden boards to become “Le Dorf.”

Many who once were part of the hippy scene have since left it – and not all have seen success. Those who didn’t make a career out of squatting houses or being a member of the Black Bloc went the way of a self-made man: built by oneself and marketed by oneself until achieving (economic) independence.

Bar 25 reality check: When in 2010 the local government decided to close the club, its founders spread throughout the city, not forgetting to do the most important thing: open new clubs. Chalet, Wilde Renate and Sisyphos are among them. These Bar 25 offshoots are not nostalgia-driven establishments, but rather professional, and profitable, businesses.

To put it bluntly, I say: Dear business owners! Or should I say dear hippies? You have sold your ideals. Sure, it’s good for your conscience that you’ve stopped expensive buildings from going up on the Spree

But are you still “Berlin’s most creative hippy commune” as I’ve read in print? I think you can forget that.

Now, finally, you’ve grown up. You are almost like us and you now have to deal with building inspections and fire safety. For a long time now, your colorful hippy clothes have come from a designer store.

It goes just like that: at the end, the “other” life is hardly different from the lives of others.