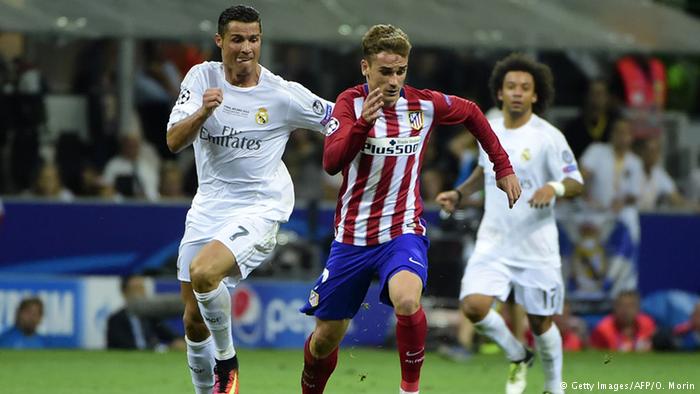 Real Madrid and Atletico Madrid faced off in the Champions League each of the previous three seasons – twice in the final – and the Galacticos triumphed every time. Will this semifinal be any different?Though their city rivals have caught up to them in recent years, Real Madrid have maintained their dominance over Atletico Madrid in the Champions League. They prevailed over their neighbors in the 2014 and 2016 finals and eliminated them from the quarterfinals the year in between.

But despite their recent success, Real Madrid are not taking Atletico for granted when the two meet in the Santiago Bernabeu stadium on Tuesday for the first leg of their Champions League semifinal.

“It means nothing that we’ve beaten them in this competition,” Real Madrid coach Zinadine Zidane told reporters on Monday.

“I’m not thinking about Cardiff (the venue for the final) either. We have to win tomorrow’s game. We have prepared well and we are ready.”

Seemingly unbeatable at one point this season – they went 40 games unbeaten in all competitions – Real Madrid have started to slip in recent weeks. After losing the “Clasico” to perennial rivals Barcelona, they are currently tied with te Catalan club atop the Spanish first division – Barcelona leads on goal difference. It has also been a month since Real Madrid have kept a clean sheet.

But their handling of Bayern Munich in the quarterfinals showed they are still a force to be reckoned with in the Champions League. They managed to score six goals past the German Champions, five of which came from reigning FIFA Men’s best player award winner Cristiano Ronaldo.

Banged-up Atletico ‘will find the solutions’

Atletico’s hopes of finally defeating Real Madrid in the Champions League have already gotten a little dimmer. Star defenders Jose Gimenez and Juanfran will both be unavailable for selection.

“We will find the solutions for the game on Tuesday,” Atletico Madrid coach Diego Simeone said.

“They always give us a hard game. The strength they have is that they never give up, no matter what happens. They fight, battle they know their strengths and use them as best they can,” said Atletico forward Kevin Gameiro.

Both of the finals these two Madrid-based teams played in recent years needed extra time to decide the winner.

Gareth Bale – who is unavailable in the first leg due to a calf injury – scored the decisive goal for Real Madrid in extra time in 2014. The Galacticos ony prevailed in 2016 when Juanfran missed the decisive spot kick in the penalty shootout.

“It was the most stressful moment in my entire career,” Real Madrid midfielder Isco said of the penalty shootout. “They’ll be desperate to beat us after the two Champions Leagues that we’ve won.”

Bayern briefly savor the one that didn’t get away

What to watch out for on Bundesliga matchday 31