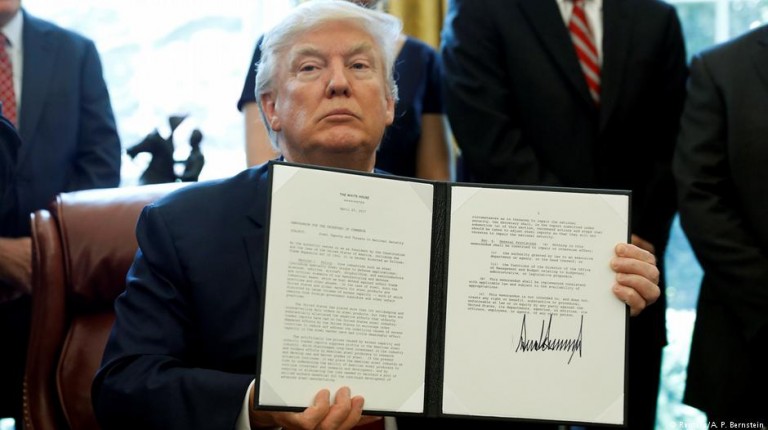 After 100 days of Donald Trump as US president, how much impact have his policies had on the environment? Will a growing global consensus and technological innovation be enough to stem their potential damage?One hundred days is a long time in politics, and US President Donald Trump has wasted little of it. He’s been busy trying to force through as much legislation as possible – often at the expense of the environment.

It ranges from lifting restrictions on mining coal to removing barriers to the Keystone XL and Dakota Access pipelines. And he’s populated his cabinet with climate change deniers.

So how much of an impact have these 100 days, which will be reached on April 29, already had on the environment – and what lies in store once the impacts of Trump’s actions really begin to bite?

Playing Canute on coal and oil?

Declaring an end to what he has called “the war on coal,” Trump signed an executive order that removes several restrictions on fossil fuel production. It was a move that broke with leaders across the world who are embracing cleaner energy sources, and was met with cries of protest internationally.

The executive order is also initiating a review of of the Clean Power Plan, and has prompted China, the UK, the European Union and Brazil to file questions at the United Nations about the United States’ policies on climate change.

Trump has long expressed skepticism over manmade climate change. But this order runs counter to economic, as well as scientific, consensus.

The costs of renewables like onshore wind and solar power are falling dramatically, and are now often cheaper than fossil fuels. The good news is, this means Trump’s order will have “limited wider impact,” according to the non-profit Energy and Climate Intelligence Unit (ECIU).

The Institute for Energy Economics and Financial Analysis says unsubsidized US wind and solar prices are expected to beat the variable costs of operating coal and natural gas plants within three to five years.

Kevin Book, managing director at independent research firm ClearView Energy Partners, said the main impact of dismantling the Clean Power Plan “is likely to be a slowing of the coal-to-gas switch, notably for future retirements of coal plants.”

“For renewable sources of power, however, the future looks quite green, as there is significant support for renewables due to US jobs and manufacturing in Republican-led states,” Book added.

In a global context, Trump’s backward-looking energy policies appear to be swimming against the tide of technological innovation and automation with the seemingly inevitable decline of coal, the ECIU said.

What’s the prognosis for the Paris Agreement?

The Trump administration has yet to decide whether it plans to withdraw from the international climate agreement signed in Paris in 2015, which set ambitious goals to reduce carbon emissions. He’s expected to decide on this by the end of May.

Any withdrawal would see the US going against a growing global consensus . The rest of the world has been largely unequivocal in its commitment to the Paris Agreement.

“Any move on the part of the US to weaken the agreement from within or withdraw altogether would meet considerable resistance and have far-reaching consequences,” said Pete Ogden, vice-president for energy, climate and the environment at the UN Foundation.

Book says despite Trump’s pledge to pull out of the Paris climate pact, “the US seems likely to remain in the agreement, at least for the time being. Staying in also gives the US a seat at the table to advance its interests, something that a number of fossil fuel companies have been lobbying the administration on.”

Despite Trump’s apparent disregard for the environment, Joan MacNaughton, chair of the Climate Group, said fears that other countries might use the US’ weakening commitment to reduce their own efforts to tackle climate change were overblown.

“There is though no evidence of other countries using the US as an excuse to soft-pedal here. On the contrary, there are some signs of determination to fill the vacuum being created by US policy,” MacNaughton said.

Still, we are in just the first 100 days of a five-year presidency and Trump doesn’t show signs of cutting easing up on the environment so far.

His latest executive order, to be signed on Wednesday, sets its sights on America’s vast nature reserves, otherwise known as national monuments. It identifies national monuments that could be rescinded or shrunk as part of a push to open up more federal lands to drilling, mining and other development.

Ocean Waves is a new resource of renewable energy