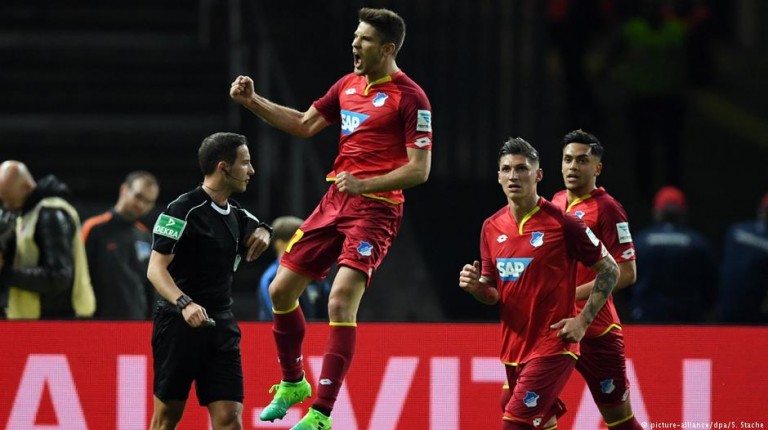 Hoffenheim best Hertha 3-1 in Berlin, thanks in no small part to a red card for Maxi Mittelstädt. That could go a long way towards settling the battle for fourth in the Bundesliga.Hertha Berlin 1-2 Hoffenheim
(Pekarik 32′ — Kramaric 39′ (pen) + 86′, Süle 76′)

Fourth visited fifth in the Bundesliga’s Friday evening fixture, and Hoffenheim managed to secure three big points in the Olympiastadion.

For a brief period after half an hour, Hertha appeared to be in control. Right-back Peter Pekarik scored his first ever Bundesliga goal, after eight years mostly in Germany, and Hoffenheim looked extremely shaky in the moments that followed.

But in the 38th minute, the first of three key turning points came to the aid of Julian Nagelsmann’s side. Maximilian Mittelstädt was penalized for handball in the area; Andrej Kramaric put a low penalty into the corner, with Hertha goalie Rune Jarstein just inches away from palming it to safety.

After a heated final few minutes of the first half, with Vedad Ibisevic particularly rambunctious but only booked for a series of fouls, the two teams went back to the dressing rooms all square.

Mittelstädt’s woes were not over, though. Ten minutes into the second period, he was dismissed for a studs-up tackle, leaving Hertha a man down.

Hoffenheim went on the attack immediately, but spurned a string of chances to take the lead. Kramaric hit the woodwork twice in a single move, first the crossbar and then the post, and Kerem Demirbay clattered the aluminium once more moments later.

In the end, center back Niklas Süle broke the deadlock for Hoffenheim with a thunderbolt struck from distance, saying after the game that he had only pulled the trigger because he felt he was having a bad game and wanted to make amends.

Ten minutes later, the result already in little doubt, Sandro Wagner put a low cross on a plate for Kramaric, who gratefully gobbled up his second of the night. Wagner had also drawn attention early in the game during a clash with Ibisevic, when he dislocated his index finger. After a loud scream as the team doctor popped it back into its socket, the big striker jogged straight back onto the pitch.

The defeat, Hertha’s sixth in their last 11 games, means that Cologne could claim fifth in the table with a win in Hamburg on Saturday.

For Hoffenheim, three points propels them into third in the table, at least temporarily. Dortmund will need to beat rivals Schalke in Saturday’s big derby to reclaim the final automatic Champions League qualification spot.