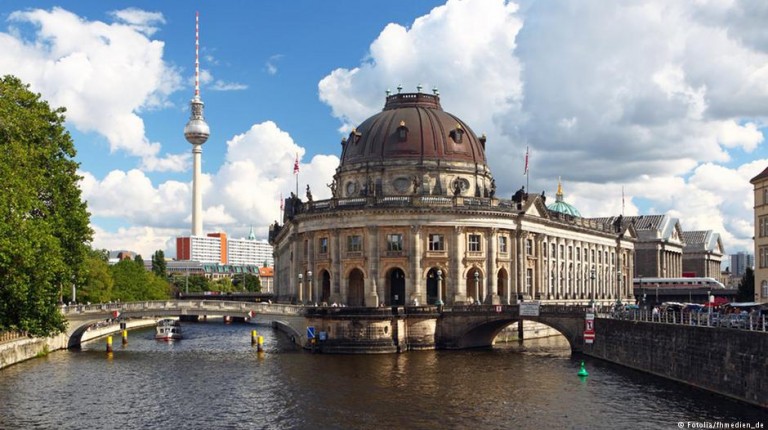 A simple ladder and a wheelbarrow were all that was needed to steal a coin worth millions from Berlin’s Bode Museum. DW’s columnist Gero Schliess reacts.People, this theft has what it takes to become legendary!

Right after the news came out that a $1-million coin was stolen from a Berlin museum, Twitter users immediately added to the hype: “First a 100-kilo coin is stolen from the Bode Museum and then the ticket machine is blocked in the subway.” Or this one: “My back is aching! Unrelated question: Does anyone know where you can discretely sell a 100-kilo gold coin?”

Some have also openly declared their admiration for the unethical deed: “Great number, have fun with the gold!”

One can wonder what will irritate Berlin museum authorities the most: the loss of the “Big Maple Leaf” or the endless wave of jokes and derision that has been rolling since the theft?

Berlin is a city that’ll gladly add punches to the comedy-suited scene of the Bode Museum, its directors standing clueless in front of the empty stand where the “Big Maple Leaf,” a 100-kilo gold coin with a portrait of Queen Elizabeth, used to throne.

The heist was dubbed “Ocean’s Eleven for the poor” by the Berlin daily “Tagesspiegel.” Great analysis, colleagues! In the film, George Clooney and his colleagues had to use the most high-tech equipment to gain access to the safe of a Las Vegas casino. In Berlin, all the burglars needed was an aluminum ladder and a wheelbarrow to take away the gold coin from the Bode Museum – and to shame the city.

Will the gold coin theft manage to outdo the derision surrounding the never-ending delays of Berlin’s new airport?

The starting point is at least promising, as it appears improbable that anyone could carry a gold coin as heavy as a washing machine from the top floor of one of Berlin’s most famous museums and roll it out to the nearby train tracks without setting off any alarms or alerting a security guard. It displays record-breaking proportions of incompetence, and that’s the best currency for comedy.

It’s too early to know how the coin heist will impact the security policies of Berlin’s 175 museums. There are still quite a few treasures up for grabs for night thieves. According to the Bode Museum director, even more valuable artworks are also part of their collection.

Wikipedia celebrates Berlin as a “worldwide outstanding museum location.” How long will it take until Berlin obtains international renown as an aluminum ladder and wheelbarrow hub? Berlin would then have an extra tourist attraction – especially for tourists with sticky fingers.

It’s enough to frighten a few people, for a completely different reason. Angela Merkel lives right near the crime scene. My personal fear: If Berlin’s police cannot manage to stop a 100-kilo heavy, relatively immobile gold coin from being taken away, how can the security of a somewhat more nimble chancellor be guaranteed?

I can’t get rid of this image: What would have happened if the thieves had decided to steal, instead of the gold Elizabeth, our own gold “Mutti”? That suddenly brings me to ask: Maybe they already tried?

No, I just need to think of Alfred Hitchcock’s “To Catch a Thief.” The film that established the romantic thriller genre in Hollywood quickly reassures me. Would Angela Merkel have the same power of attraction on the roofs of Berlin as Grace Kelly did on those in Nice?

Exactly my point. Luckily, that must have saved her.

60th anniversary of the Rome Treaties: towards a stronger EU and strengthened cooperation with Egypt