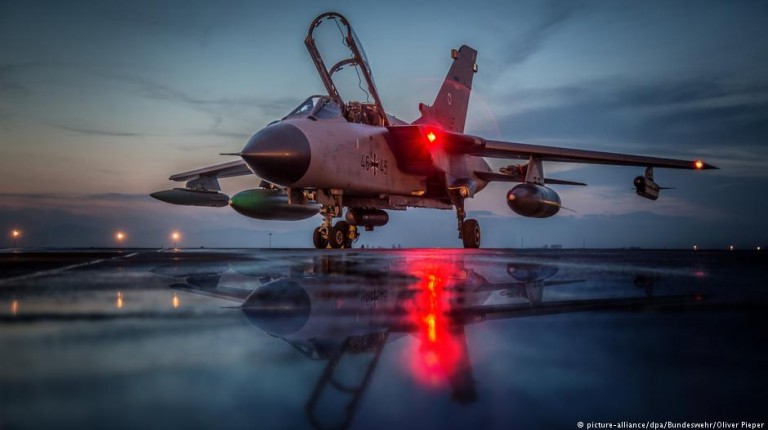 German jets reportedly passed intelligence to the anti-IS coalition for an airstrike that killed dozens of civilians in Syria. Germany only provides reconnaissance and does not carry out attacks.German Tornado reconnaissance jets taking part in the US-led anti-Islamic State mission in Syria provided intelligence that may have led to dozens of civilians deaths earlier this week, German media reported on Wednesday.

At least 32 civilians were killed on Tuesday in an airstrike on a school building housing displaced persons in the northern Syrian town of al-Mansura, about 30 kilometres (20 miles) west of the IS stronghold of Raqqa, according to the UK-based Syrian Observatory for Human Rights.

More than 1,400 civilians have been killed in coalition actions in Syria, according to Chris Woods, director of Airwars, which monitors civilian casualties caused by international airstrikes in Iraq, Syria and Libya.

Pictures taken of the building by Tornado jets a day before the airstrike were provided to the anti-IS coalition, Germany’s “Süddeutsche Zeitung,” NDR and WDR reported. They then flew a follow-up mission to assess the impact of the airstrikes.

The Tornado reconnaissance aircraft fly missions from Turkey’s Incirlik airbase as part of the US-led anti-IS mission but do not conduct airstrikes.

“The conflict in Syria is very heavily dependent on aerial intelligence,” Woods told DW. “Countries which may not be involved in the direct fighting in Syria, such as Germany, are nevertheless playing a key role in gathering crucial aerial intelligence, which then feeds into lethal strikes by others, primarily the United States.”

A German Defense Ministry spokesperson told dpa news agency that there is a time lapse between when pictures are provided to the anti-IS coalition and a decision to carry out an airstrike. The spokesperson said the pictures do not provide enough information to determine if militants or civilians are at any particular potential target.

The US military has said it has no intelligence to suggest civilians were killed in the airstrike meant to target IS militants. An investigation is ongoing.

The coalition said this month at least 220 civilians have been killed since 2014 in airstrikes in Syrian and Iraq, but several monitoring groups say the real number is much higher.