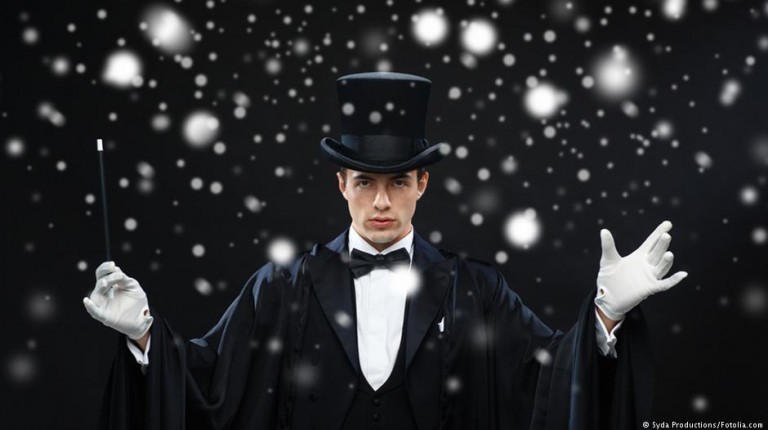 International magicians will be fascinating audiences during the Magic Weeks, running until the beginning of April in Bonn. DW met the European Magic Champion, Patrick Lehnen, to discuss the tricks of the trade.Patrick Lehnen won two awards at the European Championship of Magic in 2017, the First Prize for General Magic and the Grand Prix Stage Magic.

The 34-year-old Cologne resident and head of the local Magic Circle was the co-organizer of the Magic Weeks in Bonn, where is showing his competition number. The 10-minute performance features a desk lamp that appears to come alive and starts interacting with the magician through a series of funny, sad and magical events.

DW: How much work did you invest in developing your current performance?

Patrick Lehnen: It took me three years to develop my latest number. At first, I had the idea, and then I developed a storyboard to go with it. Then it took me three months to search for the right music and to cut it, only to get rid of it again. I knew which emotions and which atmosphere I wanted to convey, and then I looked for the music that would fit.

Three years passed by until I was able to present the piece to an audience for the first time. When I performed it in a theater, I had no idea how it would be received. Would people like it or not? In the end, I got standing ovations, and I knew: Yes, it works!

What is the biggest challenge for a magician?

Developing a dramaturgy tends to be particularly difficult. You have to get the audience involved in a story line that leads through the piece, and it must end with an awesome finale. This time, however, I broke an important rule, according to which the most spectacular things should occur at the end, like “Boom – a woman appears” or something like that.

In this particular case, however, things are more subtle. It’s actually just a small effect that’s connected to the beginning, a moment of reconciliation and joy contrasting with a very sad moment that occurred just before.

A lot of technique is involved in your current magic piece: A lamp starts to move while reacting to you as a magician.

Yes, the technical part was highly complicated, especially since I don’t have a clue about electrotechnics. I tried to find people who could help me with that. But I still had to read and teach myself a lot, as the requirements to build this particular lamp greatly differ from those that apply to normal lamps. After all, the magician’s techniques must remain invisible for the viewers.

When something doesn’t work as it should, I have to analyze all the possible causes. Is a cable broken? Is a resistor or a capacitor missing?

It took me an entire year just to develop the circuit diagram of this lamp. And it took me another two years until the whole mechanism actually functioned.That was a very intense time with a lot of ups and downs. Quite often, I considered giving up when, once again, something didn’t properly work, and I thought that I would never get it done.

You discovered magic when you were 22 years old, but you first thought you wouldn’t ever perform on stage. How did you finally become a magician?

At the beginning, I just wanted to improve my dexterity. I already did juggling, and I played the guitar and the piano.

I then happened to come across a magician’s video on the internet. He did some crazy things with cards and I also wanted to be able to do that. I watched this video numerous times until I finally grasped how he did it. I then bought my first set of cards, and I played around with it until I was able to perform the trick.

Then I watched other videos and met other magicians in a magic shop. At some point, I decided to join the German Magic Circle. You need to do an entrance exam, including a 15-minute performance. I presented several card tricks, but didn’t feel good about it as these tricks were so complicated that I couldn’t pay attention to my performance anymore.

That’s when I understood that it doesn’t really matter if what I present is complicated or not. What really counts is just the presentation itself. When I understood that, I started to work less with cards, concentrating on my presence on stage and comedy. And I noticed that it’s more fun to present and perform something.

The stage allows me to approach people. When I stand on the stage and show them something, then they all get to know me. Somehow, it’s also a presentation of myself. And afterwards, they all come up to me as though we’ve known each other for a long time. That’s much simpler and makes me feel more comfortable than if I would have to actually talk to them first.

You work full-time as a programmer, and you spend most of your free time developing your hobby, magic. What fascinates you so much about it?

Magic is so multifaceted! You can buy a simple magic trick in a store and then present it. You can perform it in a serious or a funny way. What counts is that the presentation actually works, and that you perform your tricks in an entertaining way. You can also invent your own pieces. In magic, there’s a lot of room for creativity. You’re your own director, makeup artist, choreographer, constructor, inventor, performer and actor. And that’s why I stuck to magic. It’s such a complex field that you never get bored.

In 2011, you participated in contests for the first time and immediately became German champion. Just one year later, you were runner-up at the World Championships in Card Art…

Back then, I was totally naive. I didn’t really like the idea of contests, but I participated nevertheless as I wanted to make this experience, and also, because friends persuaded me to go for it. Much to my surprise, I won the contest, I became German champion, as well as runner-up at the world championship.

That was a door-opener. I received requests from all over the world, from China, Italy and Spain. Then I toured the world, meeting a lot of wonderful people and discovering exciting places. And I had the opportunity to perform together with great artists. That was so much fun that I wanted to repeat the experience.

Has your success at the contests changed something for you?

When you win a contest and other magicians watch you, magic festivals all over the world want to have you there. You get booked. I just received requests from China, Italy, Belgium, Prague, and just now, an email arrived from Latvia. That’s all very exciting. And that’s when you can travel around the world with your magic.

Climate change could displace up to 0.25 billion people

10 things you didn’t know about Beethoven