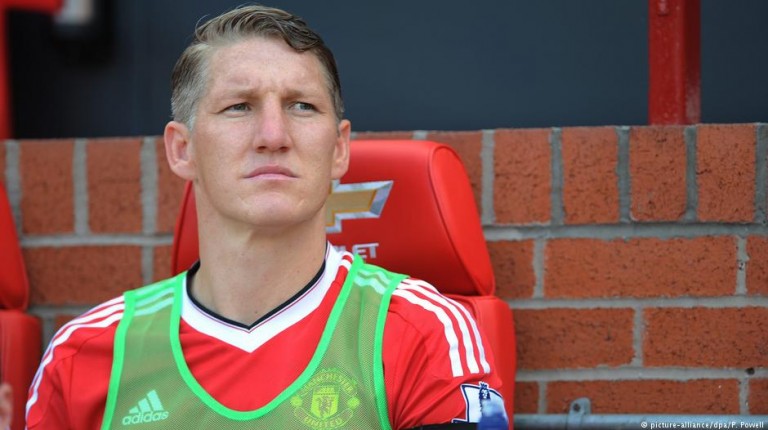 World Cup winner Bastian Schweinsteiger has become the latest in a long list of German soccer stars to move to the US. Prominent figures in the game were quick to congratulate him on his transfer to Chicago Fire.An unhappy chapter in the otherwise stellar career of Bastian Schweinsteiger is now history. In just two years at Manchester United, the eight-time Bundesliga champion, World Cup and Champions League winner never progressed beyond the role of nice-to-have squad player.

“I wish I could have done more for you but it was time for me to make a change,” he said in a video message directed at Manchester United fans.

The vast majority of his contemporaries in Germany congratulated the long-time captain of the national side and laid the blame for his travails in Manchester squarely at the door of coach Jose Mourinho.

“He gave everything he had in Manchester, but always had the feeling Manchester were planning without him,” Germany coach Joachim Löw said Tuesday. “It is a shame it had to end like that. Manchester United could certainly have still done with him.”

Löw added that Schweinsteiger felt at home in big cities, where he could immerse himself in new experiences. A sentiment that was echoed by Bayern Munich President Uli Hoeness.

“He is a global player who can adapt anywhere in the world,” Hoeness told German channel Sky Sport News. “Being the fifth wheel on the car was never going to be a long-term solution in Manchester and this is a fitting way to end his career.”

A job to do

Having spent 17 seasons at the club, Bayern are hopeful of securing Schweinsteiger’s services as an ambassador at their US office in New York. But despite a recurring knee injury in recent years, the midfielder still has a job to do on the pitch.

“I hope he plays more regularly in America. He is fit again, which is not unimportant in America as well,” said RB Leipzig coach Ralph Hasenhüttl, who played alongside Schweinsteiger in Bayern’s reserve team. “You need to be able to run there too and I’m sure he will provide plenty of highlights and enrich the league. ”

The standard of play in the MLS is roughly comparable to the upper reaches of the German second division, according to Arne Friedrich. The former Germany international spent a year Chicago Fire himself in 2012 and said that Schweinsteiger can expect a hands-on role.

“In contrast to Bayern Munich or Manchester United, he will get a lot more insights into what goes on behind the scenes in Chicago,” Friedrich told the German tabloid “Bild”. “Fitness has traditionally been a high priority in America, but tactically and in terms of the games he has played in, Bastian has a great advantage.”

In addition to Friedrich, Schweinsteiger is following in the footsteps of a whole host of famous names from German football in moving to the US. His Bayern predecessors Franz Beckenbauer and Gerd Müller spent several successful seasons with New York Cosmos and Fort Lauderdale Strikers respectively in the late 1970s. The first German to play in the MLS was another former World Cup winner, Lothar Matthäus in 2000.

And his former national team coach Jürgen Klinsmann is well established across the pond.

The general consensus is that Schweinsteiger will feel right at home Stateside. “Chicago was one of the nicest parts of my career,” said Friedrich. “Bastian will enjoy more anonymity than when he was in Munich or Manchester. You can move around the street, go to restaurants and bars.”

Although married as he is to former women’s tennis world number one Ana Ivanovic, Schweinsteiger will surely enjoy A-list celebrity status in the MLS.