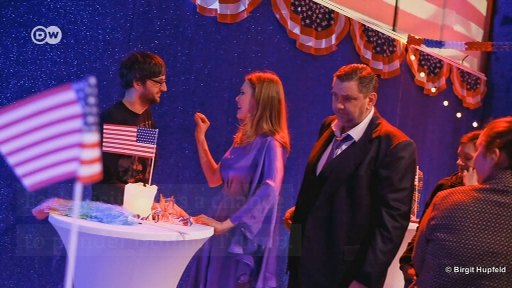 The US president is known for his 140-character rants. Now a theater in Germany is taking on Donald Trump with a similar show of provocation. Spoiler alert: The White House falls apart at the end.Less than two months into Donald Trump’s presidency, the US leader remains a divisive figure in the public eye. His controversial remarks and rants on Twitter make for clickable headlines all over the world. A theater in the western German city of Dortmund decided to capitalize on the president’s provocative image and is staging a show that examines his life in unique ways.

The production of “Trump” was only recently added to the repertoire of the Schauspiel Dortmund theater company, as few had anticipated the millionaire’s victory at the polls ahead of the November 2016 elections. Based on “The Trump Card,” written by American playwright Mike Daisey, the play has, however, been featured on numerous stages across the US for quite some time now, where it has been attracting a solid following as a one-man-show.

The Dortmund production takes a slightly different approach: Instead of using one narrator, two individuals perform both on stage and mingle among viewers, allowing European audiences to gain further insight into the strange world of US politics. Highlighting issues that predate Trump’s election win, the play also speaks to German theatergoers for a different reason: With elections lined up in a number of European nations this year, including Germany in September, voters are paying much closer attention to whether the US results prove to be a harbinger for Europe.

After all, they say that art imitates life, but also that life imitates art.

The stage at the Theater Dortmund is set to look like an election rally that could be located anywhere in the United States. The production team manages to approximate the style of a full-on pre-election party quite successfully – but then relies on clichés by adding complimentary hot dogs and popcorn to the mix, as if there is nothing more to American cuisine, or indeed culture, than fast food and quick fixes.

The audience stands right at the heart of the action the entire time, grouping around bistro tables and sharing the space with the two actors, who at the beginning of the show appear to suddenly have appeared out of nowhere. Trying hard not to spill the mustard off their hot dogs, the audience is amused and perhaps a bit puzzled. Could the portly man in the suit be Donald Trump? Is the attractive lady in the little purple number supposed to be his trophy wife Melania?

But where is Trump?

The two characters, played by Andreas Beck and Bettina Lieder, seem to have larger-than-life characteristics about them, making the theater seem almost too small to contain their positively exuberant stage personas. There is a small element of audience participation throughout the play, with the two actors addressing individual members of the audience, but only at the most passive level.

Yet there is no sign of Trump. Instead the audience seems to be deliberately misled into mistaking the stage duo as what is likely now the most-talked-about couple in the world. As they grow into their roles, the two actors swiftly make it clear that they represent quite the opposite of what their appearance may imply at this point.

“You’re here for the red meat. You’re here to watch me eviscerate this man from his bulbous pumpkin head to his bare baboon ass. And I would love to give you 86 crisp, tight minutes in which I reduce Donald to a mealy orange paste,” reads the script of “Trump” just page two. And so it becomes crystal-clear that this is meant to be an intellectual grilling – or even lynching – of the idea of Trump.

At first, the dichotomy between the stage design and the words coming out of the actors’ mouths feels somewhat perplexing, but soon the provocative one-liners and jokes about Trump’s ascent to power become rather entertaining – a bit, in fact, like Trump himself, who only two months into his presidency can hardly shock or surprise anyone anymore with his tweets and other outbursts. If anyone is a master in provocation, it is Trump, and “Trump” likewise dishes out a taste of his own medicine.

An exercise in deconstruction

Yet it is also a rather one-dimensional depiction of the US leader. Without being represented directly in any manner, the play treats Trump like the proverbial lamb that is taken to slaughter. If it is indeed intended to provide new insights into America’s democracy, the script fails to do so throughout the “86 crisp, tight minutes” of the play.

Just when the tirades begin to wear thin, something changes at a remarkably slow pace. The audience starts to notice that these two actors aren’t dissenters invading an otherwise authentically staged Trump rally. In fact, it is not a rally at all: it appears that the party is already over. Things are in a state of disarray. It is time to clean up.

The first family lookalikes start to look back and reflect on Trump’s life and career, while the audience starts to feel like an uninvited guest. The pair is taking Trump apart, one brick out of his real estate empire at a time. But at the same time they also start to take apart the stage. Patriotic flags are rolled up, tables are removed, balloons are popped, and every last piece of tinsel and taffeta end up being removed over the course of those 86 minutes.

The production deconstructs Trump as it deconstructs itself. The casual nature in which this occurs only accentuates the obvious: The White House, projected onto the wall as a backdrop, is blown up in slow motion as the artificial, pretentious and ostentatious American dream falls to pieces.

In the end, all that is left are four walls; nothing remains the way it once seemed.

In defense of democracy

The strength of “Trump” is not its clever script (adapted by Anne-Kathrin Schulz and Matthias Seie) or the ability of two actors to truthfully reproduce the wordy script. Nor is it their stamina that allows them live up to the physical demands of being both an actor and a stagehand taking down props throughout the play. Those are all noteworthy points, but the backbone of the production lies in its ability to make the audience become friends with the two characters – even accomplices.

The exercise of taking Trump apart into his components, from his allegedly racist father’s business practices to the influence that Roy Cohn, the controversial attorney who pushed Senator Joseph McCarthy’s anti-communism investigations in the 1950s, played in his life, becomes an exercise in deconstructing the audience’s mightier-than-thou attitudes. In the end, everything is left standing bare and vulnerable – much like the state of the world at present.

“This phenomenon is not limited to the US after all. Quite the contrary, these issues are also relevant for Europe, as we’ve seen how quickly the tides can turn in a democracy. This political shift to the right also exists here,” says Djamak Homayoun, who is in charge of press relations at the theater.

What the play doesn’t address, however, is what contribution the theater can make towards preserving the values of democracy.

“Well, it would be presumptuous to say that theater can have any influence on democracy, but arts and culture have a mandate to contribute whatever they can towards maintaining good international relations and peace,” said Homayoun. “We wish to stage important plays that hit a nerve, and hope that we have managed to succeed in doing so by producing ‘Trump.'”