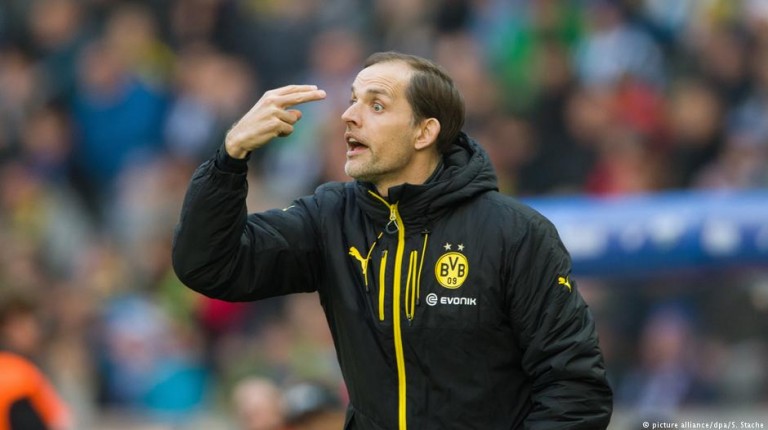 Too much rotation? BVB’s run of good form is over after they narrowly lost to Hertha Berlin. A sporting setback for the team, and their head coach, writes DW’s Thomas Klein at the Olympic Stadium.This defeat was a painful one. Borussia Dortmund lost 2-1 against Hertha Berlin, missing out on their fifth consecutive win. Head coach Thomas Tuchel made four changes after the win against Benfica – and it proved four too many for this young team. Matthias Ginter – in for Sokratis – had the worst day of them all and was at fault for both goals. The visiting fans lived up to the expectation, cheering on their team without pause. There was no doubt that the players would thank them afterwards. Only one was missing: Thomas Tuchel. As so often is the case, the 43-year-old had already headed into the stadium’s catacombs. No greeting, no glance at the visiting fans.

“The lack of effectiveness cost us three points today. It’s really frustrating,” analyzed Tuchel after the game. He is an analytical type who usually has his emotions under control. That’s in contrast to his predecessor. “We identified 100% with Jürgen Klopp,” explained BVB-fan Robert. “Tuchel is a different kind of character. Some have given him the name ‘Football Professor’. Sometimes he talks too much and too indirectly.”

Klopp has big shoes to fill

The relationship between fans and Tuchel is complicated and cold. He keeps his emotions to himself. At home games, he daren’t risk standing in front of Dortmund’s Südtribune. “I don’t even know how I would do that, and it would probably be awful,” Tuchel said a few weeks ago in an interview with WDR. BVB fan Robert believes: “Tuchel has realized that the right time hasn’t come yet to stand in front of the Süd. I think he’s waiting for the fans to call him.”

Emotion at a club like Borussia Dortmund is important. Those emotions are virtually enforced by the fans and the surrounding environment. For the same reason, many fans are still missing Jürgen Klopp. The former BVB head coach turned the club inside out, breathed new life into the team and made them internationally recognised. The footsteps that Klopp left behind are too big for anyone to step into, even Tuchel. The current head coach is one of the best around at the moment though. He’s tactically exceptional and studies the game fervently.

Tuchel makes mistakes too though and poses questions when he rotates out one of his key players without reason one or two times too many. The 43-year-old is under constant surveillance – from the fans, but also the BVB boss. If the results are missing, it will get tricky for the former Mainz coach.

“Klopp had the balls to go in front of the cameras after he made mistakes, and to admit to them. With Tuchel you always have the feeling everyone else other than him is to blame,” criticized Robert. “That’s why he needs success, so as to connect with the fans.”

At the moment, it’s a professional relationship – not more, but not less. He is accepted by the fans, but not adored.

BVB’s relationship with their fans has been put to the test this season through inconsistent form. A brilliant display was often followed by abysmal performances. After superb displays in the Champions League, Tuchel and his team disappointed in the Bundesliga against supposed weaker opponents.

The head coach often criticized his team heavily, visibly frustrated from inexplicable ups and downs. The team “failed ruthlessly” or had a “single deficit” – Tuchel has voiced himself cleary after poor performances. Klopp, on the other hand, protected the team – something BVB fans thought highly of.

“Sometimes, I’ve been ashamed of Tuchel’s quotes. Some of the things he has said make him sound like a petulant teenager,” said Robert. It’s not a love-hate relationship, but it is certainly headed in that direction.

The relationship with the fans is strained – even the game in Berlin did little to change that. The defeat hurts, but BVB still have a great chance of winning the Champions League this season – even if Hertha have closed the gap. But spot two is not unrealistic either after Leipzig’s defeat. The unpopular newly-promoted side has a six-point advantage over them. “BVB will definitely finish second,” smirked Robert. Finishing second would be a success, and would improve Tuchel’s relationship to the fans. In order for that to happen, though, BVB have to find the key to consistency.