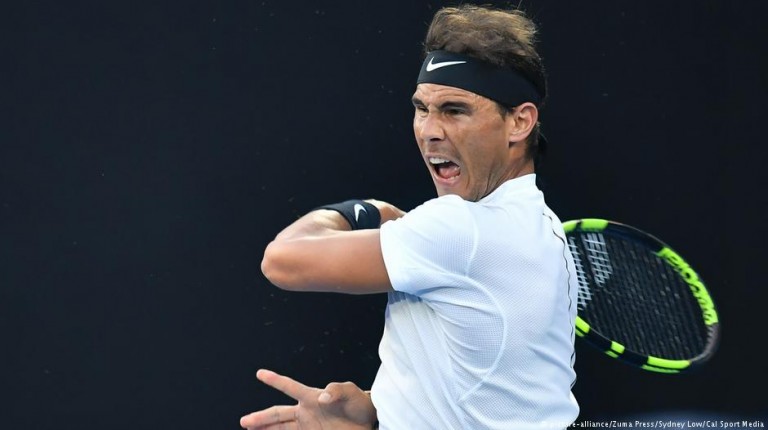 Rafael Nadal edged past Grigor Dimitrov in a marathon semifinal on Friday. Nadal had to dig deep to set up an unlikely repeat of the 2009 final with Roger Federer, warming the hearts of tennis romantics everywhere.That Melbourne final eight years ago is Nadal’s only Australian Open win to date. Federer took the title the next year before Novak Djokovic started a run of dominance that saw him win six of the next seven Australian Open titles.

With both Federer and Nadal the wrong side of thirty, both ranked low in the draw and having failed to win a grand slam between them since 2013, it was widely assumed that tennis fans had seen the last of the pair in a major final.

But Nadal’s typically gutsy 6-3, 5-7, 7-6, 6-7, 6-4 win, which took just shy of five grueling hours, means the pair that dominated the sport for so long will have a chance to add to their 31 combined singles grand slam titles (Nadal has 14, Federer 17) on Sunday. “It’s special to play Roger again in the final of a grand slam, I cannot lie,” Nadal said after the match.

Bulgarian right-hander Dimitrov had beaten Nadal for the first time in eight attempts last year and started in confident fashion, taking the first two points from the Spaniard’s serve before Nadal held on. But it was the 2009 champion who drew first blood, breaking Dimitrov in the fourth game when his whipped forehand was too hot for his opponent to handle.

A hold to love increased Nadal’s grip on the set, with the wrist injury that has troubled him for so many years seemingly forgotten. The 14-time grand slam winner’s familiar muscular groundstrokes continued to heap pressure on his younger opponent, playing in only his second slam semi. But it was his deft touch at the net that sealed the deal, a rare foray forward saw the 30-year-old slice an angled winner to take the first set 6-3.

But Dimitrov roared back at the start of the second set with his forehand suddenly causing his Spanish opponent some serious problems. That shot soon won Dimitrov three break points in game four, and he took the first of those chances, before holding his serve to stretch his lead to 4-1.

After Nadal briefly looked to have wrestled the initiative back mid-set, the world number 15 rediscovered his range, taking his chance on his fifth set point to break the Spaniard’s serve, win 7-5 and tie things up at 1-1.

After a second set that lasted just over an hour, the intensity cranked up another notch in the third. Both players showed fierce determination as they exchanged games and breaks of serve. After a brief stoppage in which a fan had to receive medical attention, the set entered a tie break that had looked inevitable for some time. Nadal re-took the lead in characteristic style, grinding down his opponent just by staying in the rally until a tired shot from Dimitrov found the net.

There was a danger that the tie break loss could have taken its toll on Dimitrov’s game but the 25-year-old continued to take the fight to Nadal in the fourth. While Dimitrov pulled out some magnificent shots, unforced errors had begun to creep in to the Bulgarian’s game with a worrying regularity.

One of those winners, a booming forehand that clipped the line, forced the fourth set in to another tie break – and pushed the set clock over the hour mark for the third set in a row. This time Dimitrov took the decider. After failing with his first set point, the Bulgarian hammered a big serve down the line to level things up at 2-2.

The fifth set saw more punishing exchanges between two men drawing on their last reserves of energy. As the clock ticked past midnight and the match approached its fifth hour, Nadal drew on all his experience to prise a break in the ninth game and a chance to serve for the match.

As he had for the 5 previous hours, Dimitrov made his opponent work. But after he spurned two match points, Nadal watched as Dimitrov hit a regulation groundstroke out.

The Spaniard sunk to his knees and then lay prone on his front. He’ll have to pick himself up again for an unexpected final meeting with his oldest foe.

“It was a moment that both of us thought we would never be in again, to be in the final in Australia, we feel very happy,” Nadal said in the on-court interview post-match.

If the quality is anywhere near as high as the tennis on show today, then the fans will be just as happy too.