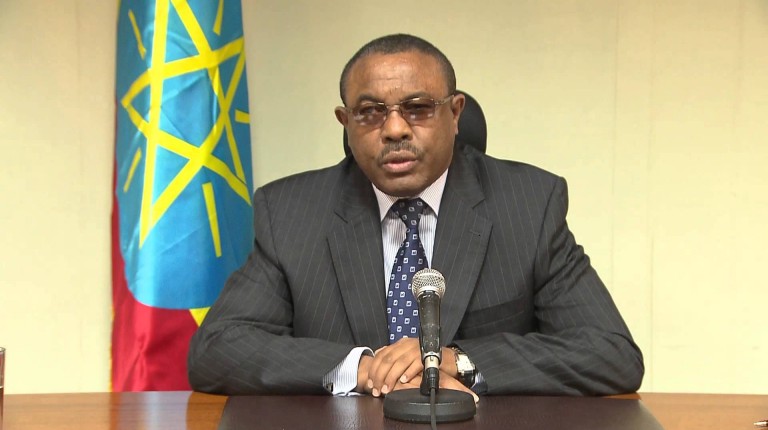 Ethiopian prime minister Hailemariam Desalegn said that there are Egyptian institutions harbouring, supporting, and funding terrorist groups in Ethiopia, during his interview on Al- Muqabla show aired on Al-Jazeera on Thursday.

The minister’s comments came in response to a question regarding his country’s claims that Egypt and Eritrea are supporting opposition groups in Ethiopia.

Among these groups is the Oromo Liberation Front, he noted.

The minister explained that they need not refer to intelligence findings to obtain information regarding these institutions, since the information is already available on the internet and on Egyptian media outlets.

The prime minister said that the support of these institutions will impact relations between both countries, as it targets Ethiopia’s stability.

When the TV anchor asked the minister about Egypt’s response, he said that Egyptian authorities said that they are working on the issue, and that they have asked for information regarding these institutions. He added that Ethiopia had sent them everything that is available on the internet.

He concluded that Ethiopia is awaiting Egypt’s response regarding this issue.

Although the anchor pushed the narrative of an Egyptian intervention due to building the Grand Ethiopian Renaissance Dam (GERD), the prime minister denied such claims saying that is not the cause, as the dam will be built without any influence from Egypt or Sudan.

This was not the first time that Ethiopia stated such claims against Egypt. In early October, a video showed members from the outlawed Oromo Liberation Front sharing a stage with what Ethiopian media described as Egyptians.

The Egyptian Foreign Affairs Ministry commented on the video saying that Egypt does not intervene in the internal affairs of other countries.

Ethiopian refugees in Egypt, including people from the Oromo and Amhara ethnic groups, usually arrange rallies in front of the United Nations Higher Commissioner for Refugees (UNHCR) office in Cairo to protest against the Ethiopian government’s violations against opposition groups in their homeland.

The Oromo and Amhara represent the largest ethnic groups in Ethiopia. A significant proportion of these communities have fled Ethiopia due to the persecution and violent treatment by the state. Opposing members of these groups are frequently protesting in Ethiopia causing them to face prison and death.

The Oromo people have an estimated population of 40 million, including 20,000 political prisoners who are accused of belonging to the Oromo Liberation Front, an outlawed group labelled as a terrorist organisation.

In late July, two Ethiopian asylum seekers allegedly set themselves on fire in front of the UNHCR as part of a protest led by the Oromo community that sought to demand the right to seek asylum with the UN office.