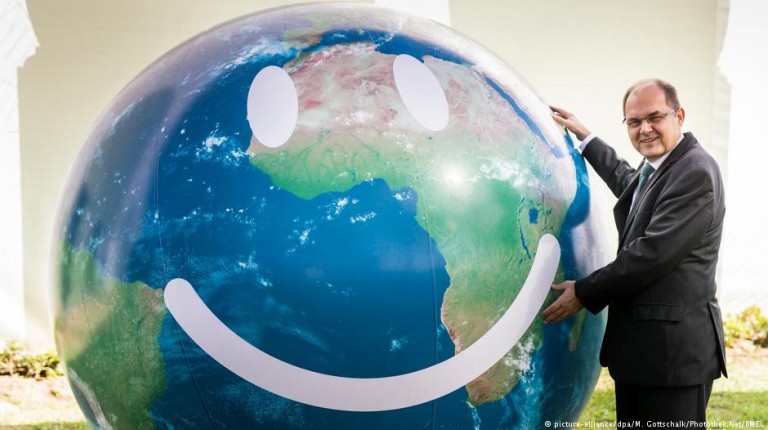 Participants at the UN Climate Conference in Marrakesh have reacted to the election of Donald Trump with a mixture of alarm and determination."Sorry, no one there." The nice young woman from the American delegation at the UN climate conference in Marrakesh is unable to provide the German journalist with an interview partner – someone who could answer questions on what will happen now, following the election of Donald Trump as the next US president. Donald Trump, who believes that climate change is a hoax invented by the Chinese. Who wants to build the controversial oil pipeline from Canada that Barack Obama blocked on environmental grounds. Who wants to cancel, with immediate effect, Obama's plan to reduce environmentally damaging emissions from coal-fired power stations. Everyone here in Marrakesh is talking about Donald Trump.

"Our climate envoy Jonathan Pershing will hold a press conference at the start of the week; you'll have to wait until then," the nice young woman continues. This will probably be Pershing's last climate conference; presumably he, like many of President Obama's team, will be replaced. Meanwhile, the outgoing secretary of state, John Kerry – a driving force behind the United States' progressive climate policy in recent years – is also awaited in Marrakesh. "Perhaps my trip is actually even more important now," he said, and sounded almost defiant.

"Now more than ever"

Questions to members of the official German delegation meet with more icy reservation: No comment, we don't even know yet who we'll be negotiating with, they say. But we're also hearing that people want to get as much as possible finalized in Marrakesh, before Trump takes office in January. The Paris climate agreement, reached with the US last year, is to be fleshed out in detail. Some 100 countries have already ratified the Paris agreement, in record time, as if they knew what was on the cards for climate protection policy.

"Now more than ever. If the United States withdraws from international climate policy, it means that others – Europe and China – will just have to do more," says Bärbel Höhn, the head of Germany's federal environment committee, who is in Morocco for a few days. But she doesn't believe that Trump will be able to do all the things he's promised to do: "In rural areas in particular, in the Midwest, where people voted for him, many farmers are already working with renewable energies. He can't alienate them completely," says Höhn.

Besides, Trump can only revoke the Paris agreement in three years' time – this is one of its clauses. He could, however, block it wherever possible. Above all, he could cut all environmental regulations at home in the US. It's seen as a bad sign that Myron Ebell, an energy expert who is also a climate change denier, is to oversee the handover of the Environmental Protection Agency to the Republicans.

"If the US allows emissions to increase again, it'll be hard to achieve the two-degree target agreed in Paris," says Christoph Bals, the policy director of the environmental group Germanwatch. He also foresees the danger of a setback to the multilateral character of climate agreements. In other words: it will be difficult to try to get all countries to work towards a solution for the climate change problem if the United States is no longer involved.

However, Bals also believes that the triumphal march of wind and solar energy can no longer be stopped. "It's no longer worth investing in coal in the US, either, even if Obama's coal plan is cancelled," he says. And certain places in the US will continue to pursue climate protection policies: "In California, in many states." Arnold Schwarzenegger, the former governor of California, is a trailblazer in matters of climate change. He too is expected in Marrakesh – and this is an American everyone here is looking forward to seeing.