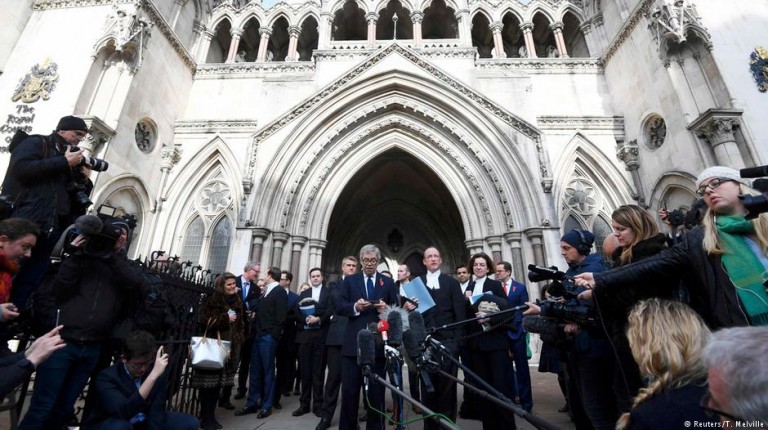 Will the British parliament upset Prime Minister May’s Brexit plans? It hasn’t come to that yet, even if the “remain” camp feels they have a new lease on life, writes DW’s Bernd Riegert.Oh no, not more trouble! The road to Britain’s departure from the European Union is becoming rockier and yes, more chaotic. On the one hand, the British prime minister still does not know what and how she wants to negotiate with her European partners. On the other hand, the British Royal Court of Justice’s first ruling was a slap in the face because it stipulates that only parliament can trigger Article 50.

Until now, the new iron lady was banking on royal prerogative powers that would allow her to officially bypass parliament. Until recently, the conservative Brexit enforcer believed that the referendum itself was enough to catapult Great Britain out of the EU. Judges in London have a different view: They insist on a parliamentary vote.

Comically enough, a hairdresser and an investment manager and not parliament, as one would expect, pursued this goal. But people have seen a lot in the Brexit saga. If you consider the Brexiteer’s referendum campaign lies and deception or the eccentric foreign minister who is a weather vane that points in the direction of the populists he is addressing, the somewhat bizarre legal dispute over the initiation of Brexit does not shock anyone.

Theresa May announced she would challenge the ruling at the Supreme Court of the United Kingdom. If she wins her appeal at the beginning of December, then she can still stick to her Brexit schedule. Before the end of March 2017, she will inform the rest of the EU that she intends to invoke Article 50 of the Lisbon Treaty. The article triggers the negotiations that will last two years. If the Supreme Court also decides that parliament must first vote, then things will get complicated. If a law requiring the approval of both houses is needed, then it will take months. The government could introduce an emergency procedure for legislation, which, however, can be challenged in court.

It is still unclear whether the conservative leader will win a majority to trigger Brexit. Her own party is even divided. What is also uncertain is the course that parliament will set for the prime minister. Will it be a hard Brexit, cutting the cord to the EU single market, or will it be a soft Brexit that would allow trade and migration of workers? It is seen as highly unlikely that parliamentarians will ignore the people’s will and prevent Great Britain’s withdrawal from the EU.

It is conceivable that the prime minister, whose position more or less fell into her lap, will call for new elections in February. If things go well for her, then she could consolidate her power. Will she? No matter how things go, Britain is heading for political turbulence. The pro-Brexit paper “The Daily Mail” has already written of “Brexit betrayal”. The nationalist, Nigel Farage, is already warning of “public anger.”

This cannot be in the European Union’s interest. As long as Brexit is delayed, uncertainty will remain. Government leaders from EU states had already asked their British counterpart to launch concrete negotiations as quickly as possible, if the Britons really wanted to leave the bloc. No one in Brussels believes that Brexit can be prevented in courtrooms or in parliament. EU headquarters have no influence on the obstinate Britons anymore. All that’s left to do is wait.

Have something to say? Add your comments below.