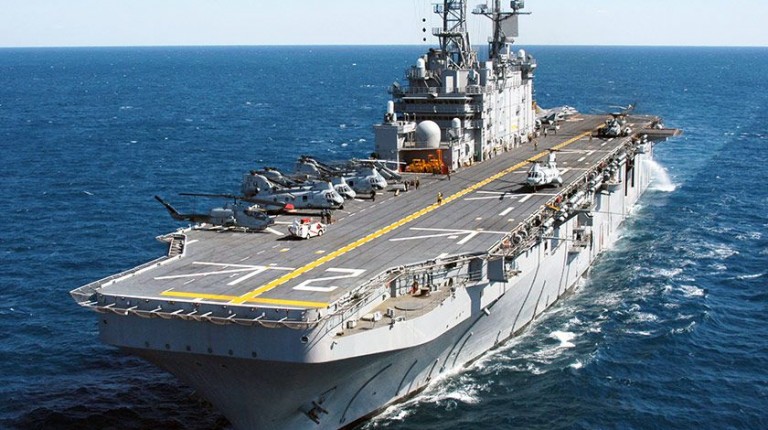 Unstable conditions in the Middle East have pushed Egypt to enhance its naval forces, commander of the Egyptian Navy Osama Rabie said Friday at a ceremony for the occasion of the arrival of the second French-made Mistral helicopter carrier to Egypt.

Rabie noted that Egypt is the only country in the Middle East that owns these kinds of aircraft carriers. These aircrafts will contribute to effectively augmenting Egypt’s position as a developed and strong naval force, he added.

The commander said that relations between Egypt and France are “historic” and, owing to harmony between the political leadership of both countries, several security and defence agreements were signed for the sake of counter-terrorism.

The Egyptian Navy and Air Force are studying several offers for helicopters to use on Al-Sadat aircraft carrier, according to state-run newspaper Akhbar Al-Youm.

The aircraft carriers, Al-Sadat and Gamal Abdel Nasser, will be assigned to secure gas fields around the Mediterranean, as well as being on call if Gulf countries ask Egypt for aid, Rabie said.

The carrier, named after late Egyptian president Anwar Al-Sadat, is the second Mistral warship in a deal signed between Egypt and France last August. The deal is worth $1bn to acquire two Mistral warships.

The arrival of Al-Sadat’s carrier coincides with the 43rd anniversary of the 6 October War in 1973.

The first ship arrived in late June after taking part in a joint naval exercise in France.

This deal come as part of other agreements signed between Egypt and France over the past year. In January, Egypt received three Rafale jets, the second batch of a deal signed between both countries to sell 24 Rafale jets. The first batch arrived in July 2015.