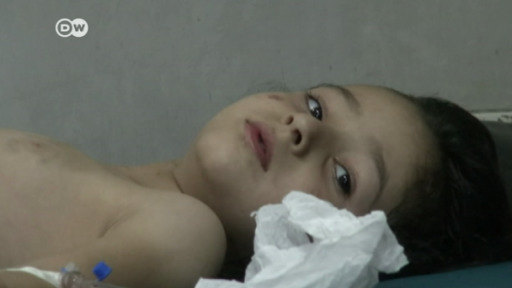 At least 100 children have been killed in airstrikes and combat in Aleppo in August, a monitor reports. On Saturday the older brother of 5-year-old Omran, whose image shocked the world last week, became one of them.
The Syrian Observatory for Human Rights reports that 448 people have been killed in attacks by the regime and rebel groups in Aleppo since the beginning of August. Government and allied Russian warplanes have attempted to put down a push launched by rebels on July 31 to break a regime siege of districts under their control.

According to the Observatory, a Britain-based operation with opposition sympathies, about two-thirds of the deaths were the results of airstrikes and shelling by regime and Russian forces on rebel-controlled districts. The Observatory, which relies on a network of correspondents within Syria, reported that 163 noncombatants, including 49 children, were killed by shells launched into government-controlled areas.

More than 290,000 people have died as a result of Syria’s multifront war, which started as a series of peaceful protests against the government in March 2011.

On Saturday, the Observatory also reported that 10-year-old Ali Daqneesh had died from injuries sustained in an airstrike on Wednesday. An image that circulated last week of Ali’s 5-year-old brother, Omran, temporarily cast new international attention on the conflict and the siege in Aleppo.

“He was martyred while in hospital as a result of the same bombardment that their house was subjected to,” said Besher Hawi, the spokesman for the local council of Aleppo.

Turkish Prime Minister Binali Yildirim said Turkey could allow a postwar transitional role for Syrian President Bashar al-Assad, but said Assad would have no place in the country’s future. Speaking to foreign media representatives in Istanbul, Yildirim also said Turkey, which has supported rebels and taken in more than 2.7 million displaced Syrians, would aim to become more of a regional player with regard to the conflict in the next six months.

“Could Syria carry Assad in the long-term? Certainly not,” Yildirim said on Saturday. “The United States knows and Russia knows that Assad does not appear to be someone who can bring (people) together.”

Yildirim said Turkey would not accept roles for Kurdish rebels or the “Islamic State” in Syria’s future either.